Report from the Ghost of Glaciers Past

This post is for all of you who have read or heard that the world is undergoing "unprecedented" glacier melt and the subsequent End of the World.  The reality is that all weather events and melting scenarios happened before --- long before --- over and over again --- and sometimes in greater intensity --- when atmospheric co2 was very low, such as the early 20th Century's 297 to 312 ppm.  In comparison, 2022's atmospheric co2 count has been 417 ppm.  Glacier melt made the papers, back in the early 20th Century, when the co2 count was much lower than today.  Therefore, it's not unprecedented.  Go look it up, yourself.

Now, there's a lot on this subject to convey.   The point at present is to show you that this phenomenon occurred WHILE ATMOSPHERIC CO2 WAS LOW --- from 297 to 312 ppm.

Above: Prediction that the SVARTISEN GLACIER of Norway would be gone by the Year 2000.

Below:  Today, in 2022, the Svartisen Glacier is the 2ND LARGEST in Norway, at 142 sq miles in size.  It certainly did NOT disappear by the Year 2000, as was predicted by experts of the era, and as was reported by AAP-Reuters.

Below is a super important lesson in how fast glaciers form.  In 1916, there was no glacier there, in Mounta Danello, Italy.  Rather, there were 15 Austrian soldiers there.  Twenty years later, a glacier melts and reveals the soldiers' remains.  It didn't even take twenty years for the glacier to form.  Thus, glacier size is quite flexible over relatively short periods of time.  Glaciers can form quite rapidly. 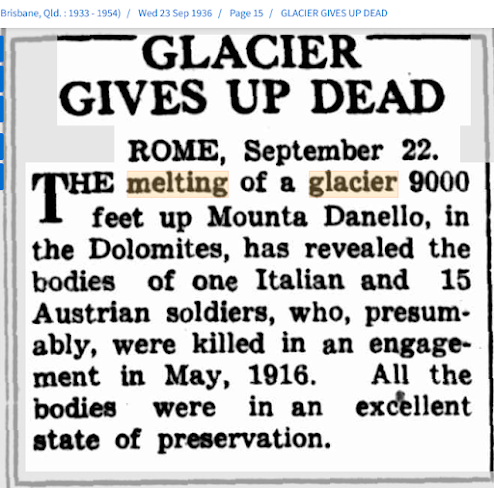 Below:  A receding glacier in 1912, when co2 was at 301 ppm.  It was receding a mile a year.  Thus, we have yet more evidence that the 2020s are not unprecedented or unique, in any capacity at all, whatsoever, in the least.  Even the lying scientists and lying media members of today is nothing new.  It's all the same old same old.  Greed.  And the American taxpayer gets to be the swindled sucker. 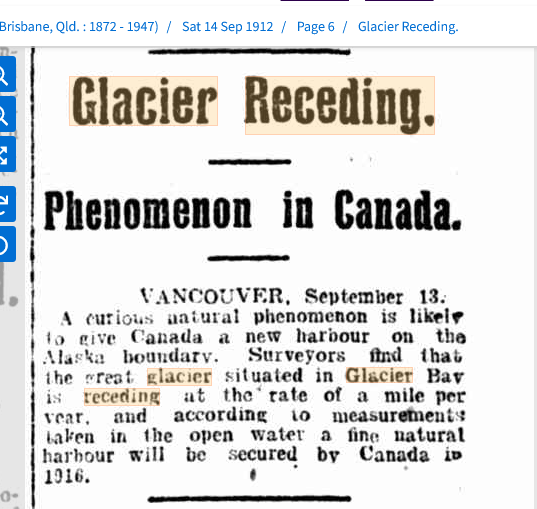 Below: Newspaper report of  January 14, 1939, when the co2 count was 311.  That's 106 ppm LOWER than today.  Yet, it states that "geologists all over the world" were puzzled by the continuous retreat of ice glaciers.  That worldwide glacier retreat occurred 83 years ago.  Thus, any glacier retreat reported today, tomorrow, or next year is NOT something unprecedented.  It's the same old same old.  So, don't let Michael Mann's false science provoke you into suicide ... or even clinical depression.

BTW, Michael Mann was NEVER nominated as "co-winner" of any type of Nobel Prize, and therefore, he NEVER was co-awarded (or exclusively awarded) any Nobel Prize in anything.  Democracy Now lied on air.  Michael Mann's lawyer lied on paper, and Michael Mann repeatedly lied, period.  In fact, Michael Mann simply lies, per se.  In as much, the weather and/or climate was NOT mild throughout the 1,000 years preceding the Industrial Age.

Plus, Mann did NOT submit to Dr. Tim Ball the data set for Mann's ridiculous hockey-stick temperature graph, as Mann promised a Canadian court he would do.   And Mann did hide the 1960s & '70s temperature decline of Briffa's much more honest temperature graph.   And all that Tim Ball wanted was for Mann to show his methodology, in arriving at the hockey-stick graph which omitted the existence of the Medieval Warm Period and Renaissance-era & Baroque-era Little Ice Age.

One more thing: Michael Mann is not going to get China to cease its extensive coal plant construction projects.  And concerning India, in the Years 2021 & 2022, it commissioned EIGHT coal plants with 4.49 GW (gigawatt) capacity.  Plus, 39 coal plants are under construction there --- in India..  What is Michael Mann and John Kerry and Bill Nye and Al Gore doing about it?

Coal releases mercury.  Mercury is obviously not good for health.  Sulfur Dioxide gets released during coal-burning.  Not good, either.  Fly-ash too, as well as certain nitrogen oxides, emit from coal when coal is being burnt.   So, instead of suing Tim Ball, Rand Simberg, and Mark Steyn, Mann should have been reaching out to India and China.

Mann's purported "expert witnesses" were declared invalid by a DC court judge, incidentally.  They were officially declared NOT experts in the lawsuit which has been dragging-on for years.  The reason is that they did NOT show the methodology that resulted in their conclusions.  And of course, they claim that the Little Ice Age & Medieval Warm Period were only local events, and not worldwide.  They showed zero methodology for their conclusions which are contrary to chronicles, ledgers, journals, and strontium isotope analysis.

Go through newspaper archives, and you will see that Mann, Al Gore, PBS, & taxpayer-money-grabbing scientists have been lying to you, in a "false light," sleight-of-hand fashion.  They have been omitting lots of facts. 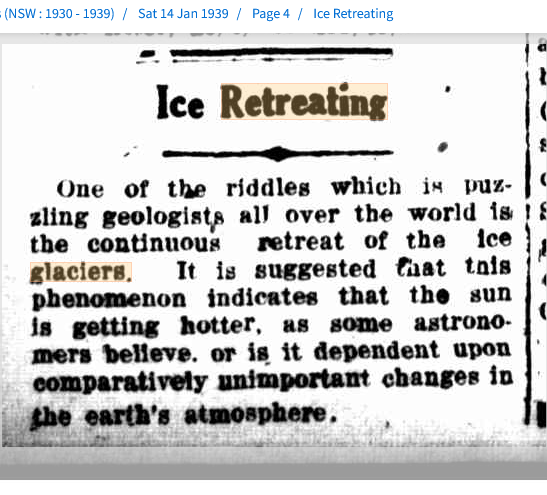 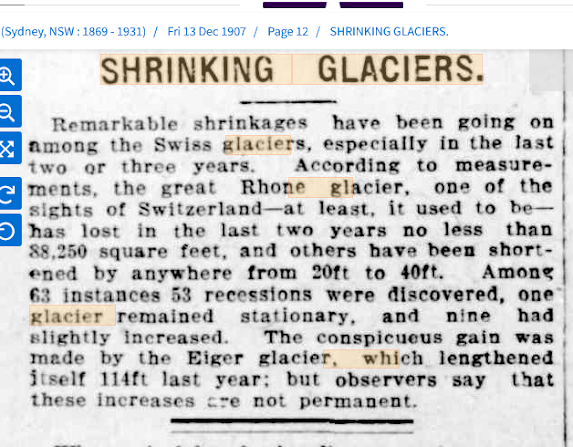 Below:  In 1905, Swiss glaciers were known to be shrinking.  Yet, the article had a global reach to it.  It mentioned "the fact seems to be that glaciers all over the world are shrinking," even though the co2 count was only 298 ppm; 119 ppm LOWER than today. 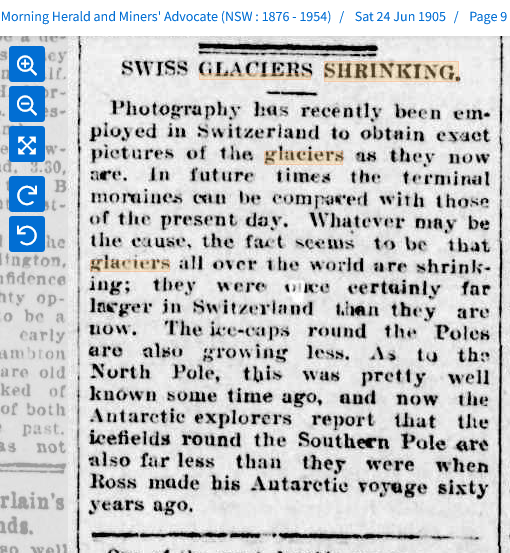 Below:  This article mentions that Swiss glaciers were shrinking since 1922.  And of course, I called 1922 "the Year of the Great Meltdown."  None the less, did you ever hear about the 36 year glacier cycle by which a glacier waxes and wanes, like the phases of the moon?  Well, it's mentioned here:

Below:  As far back as in 1902, people were noticing the gradual shrinking of the Alpine glaciers, to the demise of the tourist industry there.  That's 120 years ago.  So, this phenomenon is NOT new.  It's apparently cyclical, because, during that general time span, glaciers were mentioned as having a waxing and a waning to them, a lot like the phases of the moon.

All in all, glacier melt is NOT a new 2022-only phenomenon, or even a 21st-Century-only problem.  It was happening as far back as the beginning of the prior century, and one can logically deduce that glacier melt was rampant during the [1] Medieval Warm Period, [2] Roman Warm Period, and  [3] Minoan Warm Period, as well as the Eemian Warm Period (when seas level was 8 to 12 to 16 feet higher than today.)

The media was completely wrong about Iraqi Weapons of Mass Destruction, and it was wrong about several other things, including climate doom predictions.  The media is not the Eternal God.  It has been repeatedly shown to be wrong, time after time.  It's an industry run by people looking for ratings and profit ... or sizable Congressional (Public TV) funding.   Let's be really honest here:  Truth & Justice is NOT the American Way, Superman.

Below:  At the very least, look at "July 27, 1903."  Then look at, "MELTING GLACIERS."  This is a report that the famous Jakobshavn Glacier of Greenland was receding --- 119 years ago, when co2 was 297 ppm.  Well, in the vicinity of 2016 to 2019, the same glacier was reported as having had three consecutive years of ice gain.  Climate is cyclical, much like the phases of the moon.  It waxes and it wanes.

All twelve of these samples should help you realize that you have been told a long line of lies about climate history and the present climate.  Look through newspaper and magazine archives, yourself.  The recent claim of a "climate crisis" has all been a con game, played by the media, fund-raising scientists, money-grabbing politicians who want re-elected, ex-politicians who want a second or third home. The doomsayers all have a financial conflict of interest.  Thus, they are NOT unbiased.  You don't have to submit to Mind Dictators.  Go and be free.

The Ghost of Glaciers Past