The news of it was liberating, because it was the opposite of the 30 year long encroaching doom predictions of ~ non-scientist Al Gore, ~ Michael "Hockey Sticks" Mann who should know better, and ~the Jim Hansen whose June 1988 senate pre-hearing antics were revealed by former Senator Wirth.

The news of this event made its way to the tunnel-visioned CNN.  At present, the news of it is being smothered by other climate-related coverage.  Newer news reports have reported conditions opposite of what happened for a six month period in 2021:

Now, with all the climate disaster propaganda being constantly released, did you assume that the Global Warming profiteers would sit idly and re-assess their belief system, upon hearing that Antarctica's coldest winter had just transpired?  ANS:  Of course not.  They went into hyper-drive, ramping-up the Global Warming, man-made-co2, burning-of-fossil-fuel, cap-and-tax, carbon-tax propaganda in geometric progressions.  And there were outrageous sleight-of-hand deceptions amidst actual news events.

The message always was that the world was going to soon end, if you did not shell out hundreds of billions of American taxpayer dollars and corporate donation dollars to them --- to the Climate Change People.

But, the Year 2022 was the year of far more tax dollar appropriations.  The tax dollars are simply added sums to the already overwhelming National Debt.

The outrage is that, instead of spending time and money on life-giving CO2, efforts should have been made in remedying the ills caused by synthetic chemicals and their inundation into every realm of life.  And of course, these synthetic chemicals includes those "Forever Chemicals" such as polyfluoroalkyl substances (aka PFAS,) for starters, followed by many more of the synthetic realm.

I am also familiar with the Winter of 2014 --- the coldest winter in 40 years.  As I recently stated, climate is a cyclical roller coaster ride.  So, spend your money on countering PFAS chemicals, not on life-giving co2.  To combat CO2 is to combat life itself.

The illustrations directly below concern the sea ice extent surrounding Antarctica in June and July of this year ... 2022.  The red fluorescent circle around the Antarctica ice extent is the average (actually the "median") amount of ice which is usually present there in June and then in July.

While looking at it, the ice extent looks boringly average ... typical.  No big loss of ice through the years.  No big deal.  In fact, look at the numbers at the horizontal bottom of each illustration:

In having the Sea Ice Extent starting date the same as the year with the highest volume of sea ice, it guarantees that every year to follow will have a lower ice content number than the "benchmark year."  That is deception in action, being that the unfamiliar person will instantly assume that 1979 was an average ice year, instead of the year with the most ice on record.

Previously, in late February 2022, the report was that Antarctica had it lowest ice extent in ultra-modern history, meaning "since 1979." It was exactly like the report of July of that year.  At the least, the Space Magazine author who did quote the U.S. National Snow & Ice Data Center in an article, stated that:

"However, the amount of Antarctic sea ice varies considerably each year and climate change is not necessarily to blame." ...

... "The shrinking is likely natural, and partly due to strong winds pushing some sea ice farther north into warmer waters, Nature reported.  I think much, if not all, of the event can be ascribed to natural variability," said Walt Meier, a senior research scientist at the NSIDC.  NSIDC stands for National Snow & Ice Date Center.   Furthermore . . .

Of course, a Climate Con Artist will present this 2022 event in a false light, and then apply intimidation tactics, telling you that it's your fault for burning fossil fuels, and you have to pay the carbon tax, to make up for your sins..  When you don't buy what the guy is asserting, you end up intimidating the climate con artist.

Driving on an amount of ice as large as the July 2022 ICE GAIN is equivalent to driving from Washington D.C. to the outskirts of Miami Florida --- (the square root of 1.08 million miles is 1,039.  Miami to D.C. is 1,050 miles.)  Yet, July 2022 is supposed to have been the least amount of July sea ice extent in modern record-keeping.

All in all, that's a lot of ice accumulation.  Yet, it resulted in the lowest ice extent number on the chart, as far as concerns the month of July.  The remedy is to compare the more recent years, as you search for a trend or the absence of a trend.  Study wind conditions, air masses, the jet stream, air pressure, Etc.  Things are never what they seem to be to an inexperienced novice.

In addition, check for the writers'/speakers' financial interest in the matter upon which he/she speaks.  If the person making the report stands to gain (or has already been payed) tremendous amounts of taxpayer dollars, in a climate-related government contract, then he/she has a conflict of interest and cannot be brought into the conversation.

The lesson:  Don't let yourself be deceived by your failure to recognize proportionality.  Such proportionality is translated into numbers, charts, tables, and graphs.  A person can take numbers and twist them in such away that he makes a doomsday scenario.  If someone is looking for sensationalism and ratings, doomsday will be described, and this is irresponsible to do. 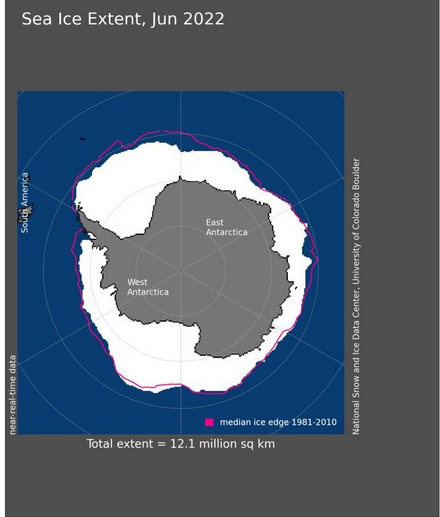 July 2022 is supposed to be the month of the least sea ice extent for any July month.  It does NOT look much different than any other Winter month.  It still had a lot of ice.  The red line, of course, is the median amount of sea ice extent for July ... the typical amount ... the expected amount. 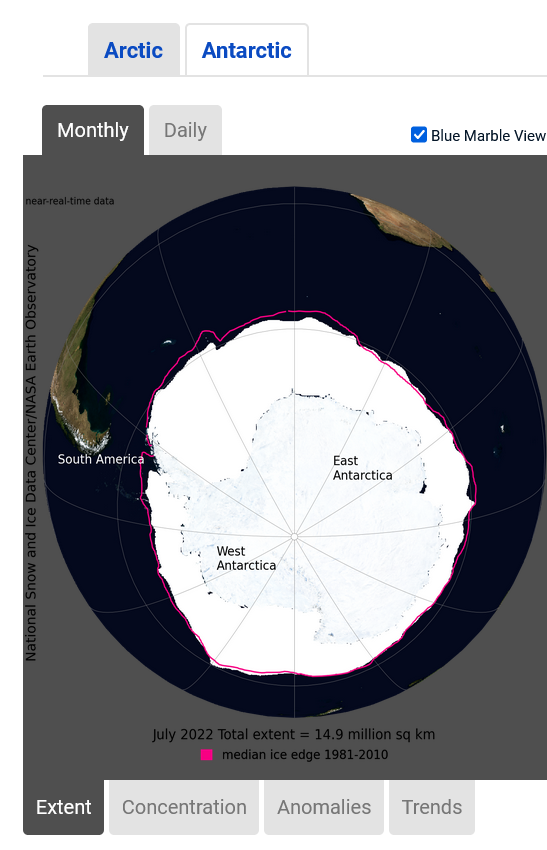 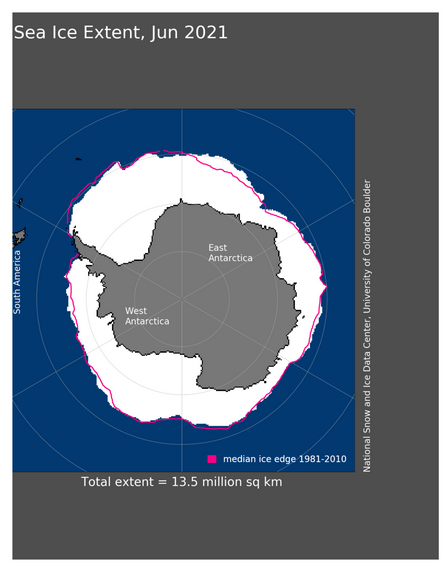 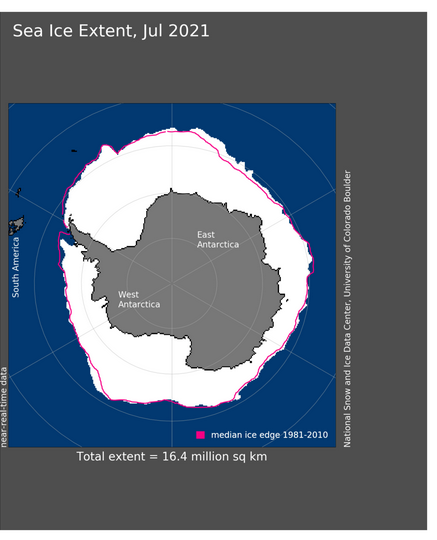 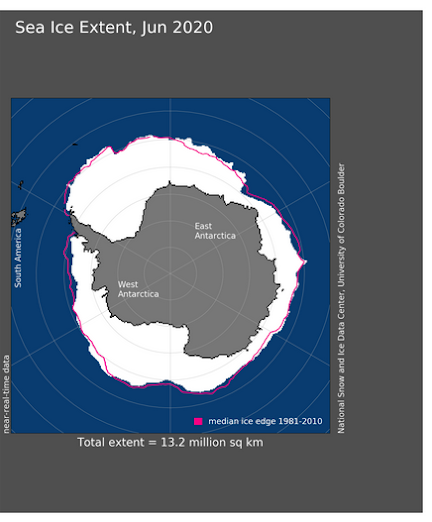 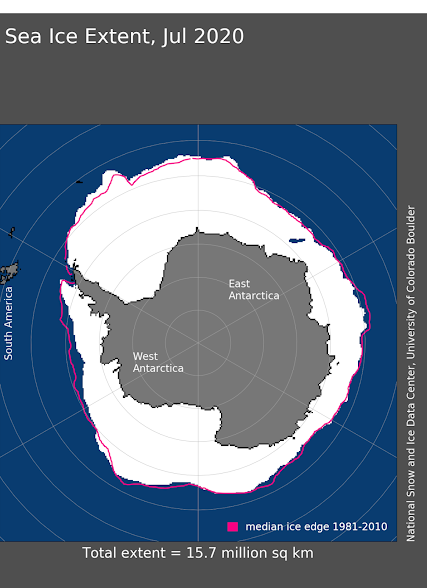