Let's take a few moments and look at the March 18, 2022 media reports on the Antarctic Plateau temperature rise, as was reported by the French and Italian scientists at the Concordia Dome C Research Station.  The temperature reading was conveyed as "provisional."  That denotes conditional ... contingent ... yet to be confirmed ... definitely not final.

The report was that the Antarctic Plateau (located 10,607 feet above sea level) reached an extremely unique high of 11.3 degrees Fahrenheit (It should have been marked at 10.76F, by the way) and MINUS 11.8 Celsius.

The average temperatures of the Concordia Dome C region for that day are -62F for a high and -75F for the low temp.  In addition, March 18 is the coldest day of the month for that area, statistically speaking.  THUS, it was a temperature anomaly wave, as opposed to a heat wave that occurred for about five days there.  Yet, it involved big numbers, relatively speaking.

This March 18 temperature did get news coverage, but it would have been an insult to even the average intelligence to have blamed the temperature on co2.  This is because the Antarctic Plateau is shear white, and the Albedo of ice/snow is 85, meaning that 85% of all the sun rays which hit a sheet of snow/ice reflect back into outer-space.  That means that . . .

. . . there simply isn't the presence of infrared light at the Antarctic Plateau to affect or effect temperature there.

As was proven via the many heatwaves & droughts of centuries past (when co2 levels were 108 to 138 ppm LOWER than today), CO2 is NOT the driver of climate in any capacity.  Rather, CO2 is the driver of PHOTOSYNTHESIS, and without photosynthesis, life on Earth eventually ceases.  To kill off co2 is kill off mankind.  This explains why pro-abortion activists are obsessed with the Al Gore "Climate Change" doctrine.  They hate humanity and want to kill it off, as much as possible.

They claim that mankind is killing Planet Earth.  But, the statistics are that Planet Earth has been killing humanity very successfully throughout the centuries, via:

It's a mystery that any human is still alive on Earth. 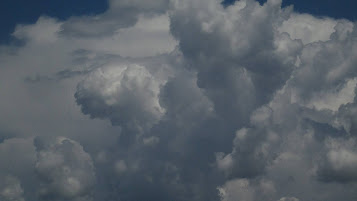 Now, the co2 levels of 2021 were the same as 2022, and 2021 is when Antarctica had its coldest winter on record ... in all of known history.  Thus, if you have two drastically different types of climate while having the same one co2 level, then co2 did not cause the drastically different climate events which occurred in less than 8 months' time.  The case is closed on this.  However, the students of the American public school system, having been as brainwashed as any students of centuries past, will hold on to that belief.  This includes the stubbornness and insistence of Hitler's Youths.

The higher than usual temperature of March 18 on the Concordia Plateau was said to have been caused by warm Southeastern Australian winds and "an atmospheric river." That phrase is new to me, UNLESS it's meant to describe the reality that the air above oceans is LATENT HEAT.  But, apparently, it didn't mean that.

None the less, a review of the Specific Latent Heat of Vaporization is essential for all beginners-novices.  Therefore, the following will help, after the following quick intro:

Q2:  How does it transfer?  ANS: Via convection or conduction or thermal radiation (which involves electromagnetic radiation.)

In as much, hot air rises.  Cool air descends.  Low pressure rises.  High pressure descends.  Plus, wherever you have cold air, you have dry air.  For now, that which matters is the Latent Heat of Vaporization (aka Enthalpy)  There also exists Latent Heat of Fusion.

Now, an atmospheric river is described as something that carries a tremendous amount of water.  Well, it was NOT humid in Concordia on March 18.

I simply assumed that the Australian winds rode the Latent Heat altitude above the Southern Ocean and then traveled inland for 680 miles, up the incline that leads to the Antarctic Plateau.

Maybe the winds were of the Chinook variety ... the Foehn variety ... the Santa Ana variety ... downsloping.  However, downsloping winds compress as they rapidly heat.  The Concordia Plateau was low pressure city.  Yet, there was a climb up an incline that was the height of a mountain.  This translates into Adiabatic Heating and Orographic rain.  Such a thing is usually followed by instant heating of compressed wind going down a mountain.

The difference with March 18, 2022 was that the wind was NOT traveling downhill in a compressed state.  It was crossing a plateau at low pressure.  But, it was exceptionally hotter than expected, even though it still remained well below freezing temperatures.

After all, if it were a matter of orographic rainfall following the path of the 10,607 foot  incline, the report would have mentioned at least a token amount of rain.  Did it?  I didn't see any rain report.  Well, it should have rained in the desert called Antarctica, being that, when air rises, precipitation falls.

If orographic rain were involved, then this was a typical adiabatic heating event, and there had to have been an actual atmospheric river floating across Antarctica.  Yet, it was such a rare event for a typical action to have caused the rarity.  None the less, the Global Warming Lobbyists made a spectacle out of this event.

The most important factor is that co2 did NOT cause this, evidenced by snow's high albedo and therefore it's high reflectivity of sunlight back into outer-space.  Period.

Concerning the oceans emitting latent heat, this phenomenon is what happens when "super-cooled" water has it's temperature raised to 32 degrees Fahrenheit.  As the temperature rises to the usual freezing point, heat is released.

Incidentally, super cooled water is that which remains liquid even though it's below 32F.  As the super cooled temperature rises, calories of heat are released into the air above the ocean surface.  Did anything like this happen between Australia and Antarctica on March 18, 2022?

One question at this point:  Why is super cooled water still liquid when below 32F?  ANS:  That water has not yet released its calories.

Anyway, a recessed front was present in Antarctica on March 18, and such a thing enables a wind to insert itself.  It is similar to those openings in enemy formations that Alexander the Great always searched to find and penetrate.

The temperature anomaly lasted until the 21st of March.  Yes, -22F was a heat anomaly.

BTW, Antarctica has dark desert land which can allow sunlight free-rein.  But, Antarctica is 5.5 million square millions and mostly white.  Albedo prevails there.

None the less, the "apparent" ... the "seeming" ... record high temperature of March 18 was amended on a couple record-keeping data sheets.  The MINUS 11.8 degree Celsius number was changed to MINUS 17.7C in one data set, and MINUS 20C on another set.

This translates into -4 and 0 degrees Fahrenheit which doesn't look as apocalyptic as originally reported.

Below is an illustration of the Australian wind (green colored border) inserting itself into an Antarctic front (blue) on March 18, 2022.  It arrived at a low-pressured 850 hector-pascals.  This would translate into 12.32 psi --- aka 25.1 inches of mercury, in terms of air pressure, and it was following the Coriolis Effect for a low pressure system in the Southern Hemisphere.  (Incidentally, standard surface air pressure throughout the Earth is 14.7 psi.)

The Vostok Station got similar temperatures at the same time.  Incidentally, Vostok means "East"in Russian.  Vostok is 350 miles from Concordia.  It's close to the distance between Pittsburgh and the New Jersey border.  In mid-March 2022, they shared similar temperatures, 350 miles apart. 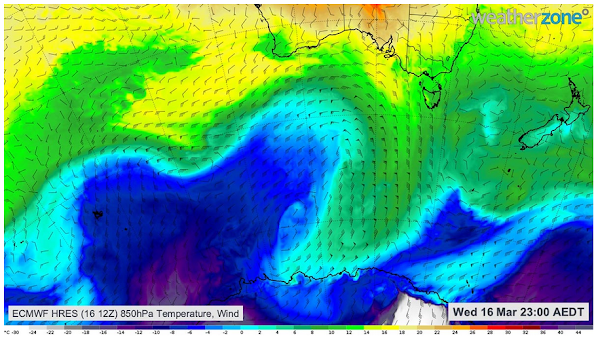 Speaking of Jersey, while the media endlessly harped on heat waves and decreasing water levels, the Jersey shoreline water was exceptionally chilly.  And why?

ANS:  Because of Upwelling ... because of water rising through the Pycnocline layer of the ocean, making its way to the surface.  It brings with it rich nutrients for the ocean dwellers.

The average temps for Jersey ocean water, for August, is around 70 - 75 degrees, and it has made it to 79F.  This August, it was found to be 58F and similar temps.

This is pertinent, in light of the Resplendy-Keeling paper of recent years, where it was claimed that the ocean is heating 60% faster than assumed.  Well, the paper had mathematical errors in it that invalidated it.

At Jersey this Summer, that Resplendy paper was doubly invalidated, being that the upwelling water is soooooo cold.  I stated previously that the majority of ocean water is dark and 39 degrees Fahrenheit.  Well, the Jersey shoreline concurs.  It was Brrrr City there.

Back to the Concordia Station

Moreover, Antarctic March is equivalent to Northern Hemispheric September when there are temporary returns of Summer temps.  Take note of the change of ... the adjusting of ... the amending of ... the March 18, 2022 temperature. 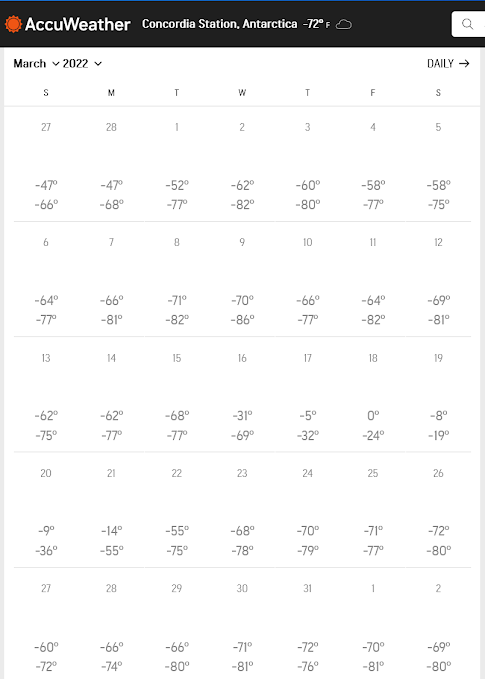 Below:  Take note of the barometer reading for March 18.  It's 28.5 Hg.  That translates into 965 millibars.  That's a category 2 hurricane pressure.  None the less, an anabatic wind is dependent upon solar irradiance, instead of pressure... so say the writers of the textbooks.  That's the opposite of a katabatic wind which is a Chinook Wind and a Foehn Wind and a down-sloping wind.

The low humidity makes things believable enough in this case.

Boring people are void of true intrigue, such as how things work in nature.  Closed minds learn nothing, especially those in brainwashing chambers (called classrooms) where they repeatedly heard, "co2", "greenhouse gases," and "the burning of fossil fuels."

The media simply wants to see people hyped-up ... as in sensationalism ... as in running wild in the streets, setting fires.  This is done in search of higher ratings.  That wild-in-the-streets pyromania has been done before.  Nothing new or intriguing there.  Try to solve some of life's mysteries, instead of ending life.  Intrigue is built into the human system.