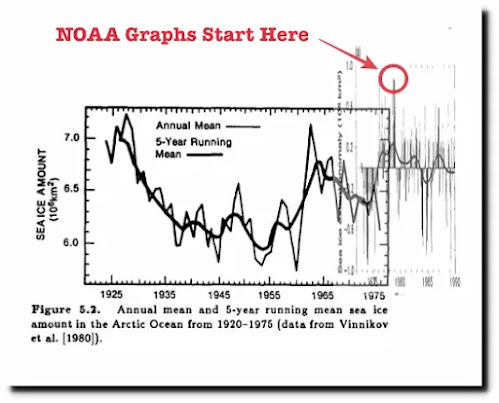 In re:  The above chart. The most Arctic Ice volume was in 1979.  Needless to say, the present powers-that-be in the United States use 1979 at the starting point in their Arctic Ice Volume graph.  This deceives the common layman into assuming that 1979 was an ordinary year, and that co2 caused Arctic Ice to get trapped in a one-way runaway ice melt.  That's a falsehood.

As a reinforcement of learning, here is a chart that concurs with the reality that there were low-volume (low-cover) Arctic ice years before the high volume ice year of 1979.  Thus, it has NOT been a one-way decrease of ice into nothingness.  Climate is cyclical, like a roller coaster:

Let's also address the altered Forest Fire Chart, compliments of the less-than-honest Biden People.  Today, that chart begins with the year of the least number of forest fires ... 1983.  Thus, the Biden People make it look as if 1983 were an average year, and all the other years to follow had doom-ridden increases of fire ... presumably caused by increased atmospheric CO2.  However, CO2 was far less in the atmosphere, when burnt fire acreage exceeded 40 million acres per year.  In as much, I would like to introduce you to the true United States forest fire acreage chart which has NO CORRELATION to any level of CO2. 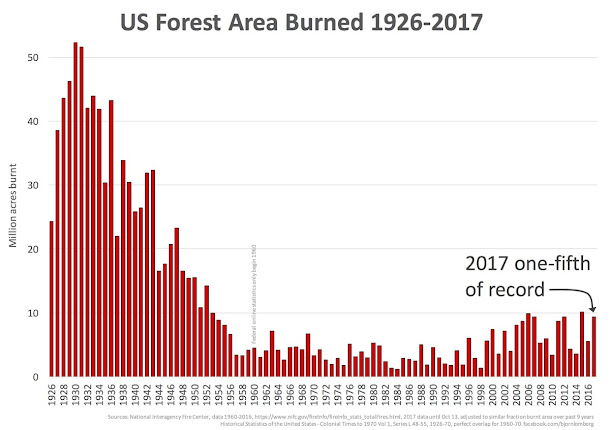 None the less, the following link will take you to the video which will show you that the Nobel Foundation does NOT recognize Michael Mann as the winner or co-winner of any kind of Nobel Prize.  This illustrates that Michael Mann is nothing more than a lying con artist who has no problem absorbing American taxpayer dollars ... like a vacuum cleaner ... on steroids.  You are living in the Age of Climate Racketeering.

See & Hear:  A representative of the Nobel Foundation emphatically stating that Michael Mann NEVER won or co-won any type of Nobel Prize

The Next Total Falsehood from the Climate Nazi Klan:  London Fires.

The following chart comes from the London Fire Brigade.  It shows that the number of yearly fires in the 610 square mile range of Greater London has decreased significantly.  The significant DECREASE occurred, while atmospheric CO2 levels consistently increased.  In fact, it was the Year 2014 when the London Fire Brigade officially announced that present London Area fires have dwindled in number to almost half of the number of fires in the 1980s & 1990s, per year.

However, in 2022, a few liar journalists claimed that rising CO2 levels caused an untold number of fires to ignite London.  Very False.  The number of London Area fires SIGNIFICANTLY DECREASED throughout the exact same time span when co2 levels were incrementally rising.  The London Area fires also DECREASED, while the London Area population increased by 1.3 million people, since the Year 2000.

This shows that there is NO CORRELATION between co2 levels and British fires, as well as population increase and British fires.   Liar journalists should be fired and sued for the intentional infliction of emotional distress.  Scaring schoolchildren endlessly is a form of child abuse.  It's the molestation of a schoolchild's mind.

In order to put things into perspective, know that Oxygen, Nitrogen, & Argon comprise 99.93% of the atmosphere ... minus the percentage of water vapor in the air.  NOT much room left for much of anything else.

I repeatedly asked people, as a poll, what percentage of the atmosphere is co2.  The majority said "30%."  Only one person got the question almost correct.  He was in Chicago, where I experienced the coldest temperatures in my life ... and I worked during -30F wind chills in Pennsylvania, and I endured brutal cold in Massachusetts. 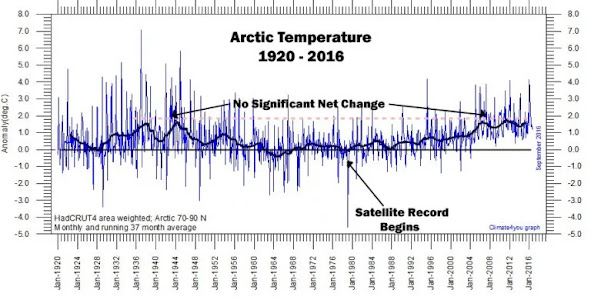 We return to Arctic Sea Ice.  As was previously mentioned, the year of the MOST arctic sea ice was 1979.  Needless to say, this is the year of the starting date for the Biden People.  That's where the altered charts and graphs begin.   HOWEVER, Arctic sea ice was very low in the 1930s and in some of the years of the 1970s.  Plus, 1954 was a low-ice year.  And let us not forget the extreme Arctic Ice loss reported in 1922, exactly one hundred years ago.  There is much more Arctic Ice today than there was in 1922.

All in all, starting the sea ice chart at the year of the most accumulated ice accomplishes a predictable deception.  It made it appear that the recent decline of sea ice were a never-before seen phenomenon.  Yet,  that depth of decline already occurred in the 1930s & 1970s (after man landed on the moon with technology advanced enough to detect Arctic sea ice volume.)  Those two decades are not too far off in time.

The great mystery is how long will the politicians and their accomplices think that they can deceive all of mankind?  The evidence proving them liars is blatant.  The only trick is to hide the evidence from the People.  It didn't universally work.  Some people made copies of the evidence. 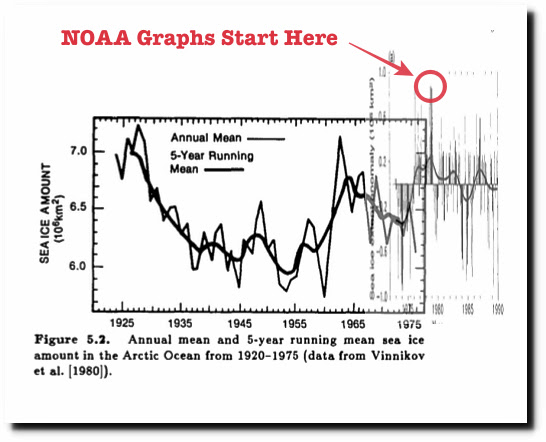