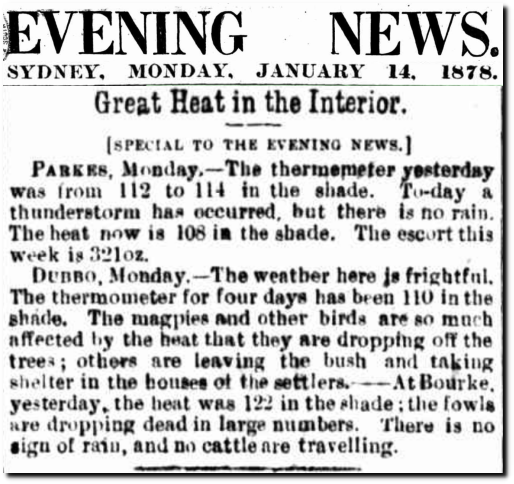 Fraud is all throughout the "Climate Change" movement, and it resulted in schoolchildren --- and now adults --- being emotionally traumatized.  It was simply a matter of:

[1] altered temperature graphs done in the name of "homogenization," WITHOUT showing any METHODOLOGY in the changing-of-numbers.

[2]  It was also a matter of hiding the decline of the Briffa Graph  (hiding the global cooling of the 1960s & '70s from Michael Mann's overtly fraudulent Hockey-stick Graph.).  And it was a matter of ...

Below:  A newspaper article illustrating that the heat of the Summer of 2022 was nothing new ... nothing that brought change to the world.  Similar weather was scientifically & historically documented as far back as 1878, when the co2 level was 290 parts per million.  That's 127 ppm LESS than today.  Yet, 1878, as well as 1896, had as high temperatures throughout the world as any year in recorded history.

Yes, 1896 was a year of brutal heat, without high concentrations of co2 being in the air.  This proves that co2 does NOT drive the climate in any capacity at all, whatsoever, in the least.  Read-up on the heat, and note that 116 & 117 Fahrenheit heat was present, during days of low co2 numbers.  In fact, it was simultaneously above 100F at 44 weather stations, in the Sydney Australia vicinity, during that time span. 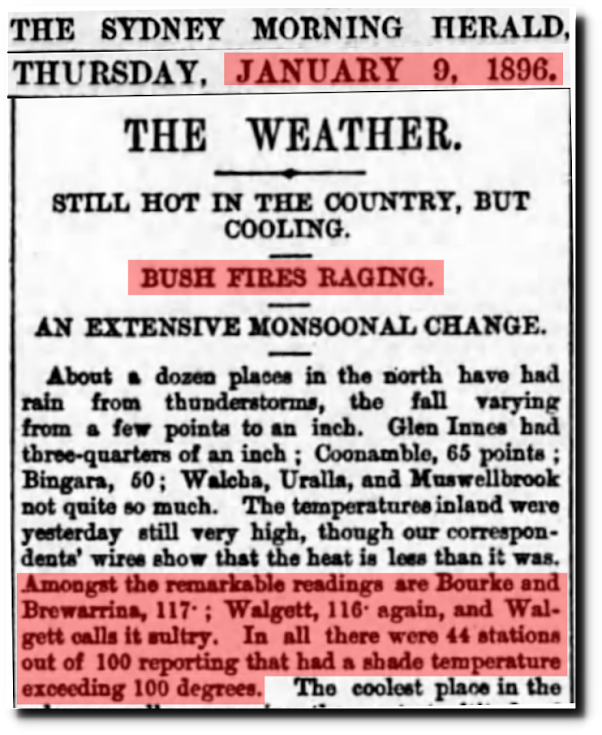 Examples of "Climate Hysteria" fraud are illustrated all over the Blue Marble Album, such as Michael Mann's claim that Australia is doomed and will be a venue of numerous "climate refugees."  Well, the Great Barrier Reef replenished.  Australia recently had a couple record crop yields.  The drought is over, and was dependent on the shifting of the Equatorial ENSO which has nothing to do with co2 levels.  Plus, Australian ski lodges had ample snow fall on them, etc, etc, etc.

On and on go the examples of sleight of hand --- "false light" --- misrepresentation & climate fraud.  It's an involved con game, where the sought-for treasure is massive Congressional funding and other types of donations.  So, the US taxpayer loses, in the end.  However, suicides are now occurring, and this Climate Con Game has got to be curbed.  Emotionally terrifying less-than-intelligent people into suicide is Wrongful Death.

Below:  A newspaper article which concurs with the general reports of the heat of 1896 being a global occurrence, and not something limited to one or two locales.  And it was brutal heat, during that year; far worse than what England experienced for two days only, during the Summer of 2022.  In 1896, there were sunstroke deaths in England. 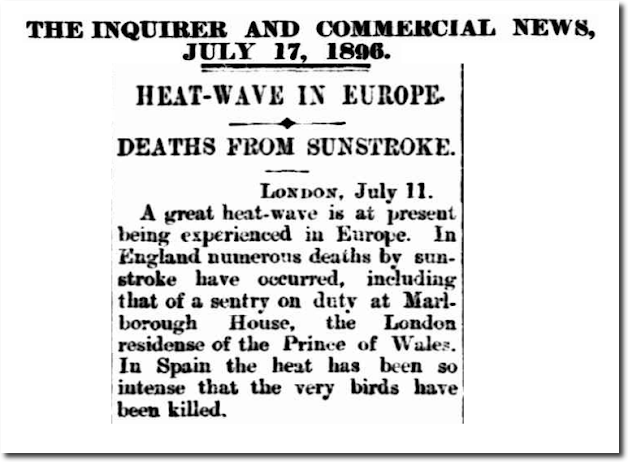 That was a real crisis.  Today's co2 alarm is a red herring, a false alarm,  a subterfuge.  After all, the Congress recently appropriated $370 BILLION U.S. taxpayer dollars to climate activism interests.  Thus, the motive for all of this fraud was & is in plain site.  The Congress and the American citizen was being bombarded with Climate Hysteria Propaganda.  So, an outrageous high amount of Congressional Funding resulted.

Below: The NYT article of August 18, 1896 shows that Michael Mann was only 124 years too late, in his dismal diagnosis of Australia.  The huge difference between then and now is that the co2 level in 1896 was 295 ppm.  That amounts to 122 ppm LOWER than today.  According to Al Gore, there should not have been any heat waves in the 19th Century.  Well, he was wrong.  This means that his unqualified theory is completely contrary to historic reality: 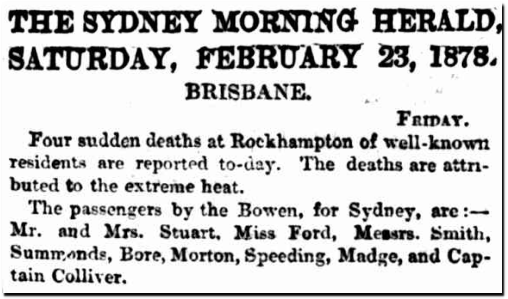 And of course, in the Summer of 2016, screen star Sigourney Weaver boldly stated, "This we have never seen before," when talking about every form of natural disaster and ice melt scenario that can be typecast in Hollywood and that can be viewed through a satellite.

Her thesis statement was that the use of fossil fuels was causing disastrous weather extremes.  Of course, the suspect was the trace gas, carbon dioxide, which activates photosynthesis and abundant vegetation, in certain latitudes and altitudes of Planet Earth.  But, there is only one greenhouse gas which has any efficacy above the ability of cirrus clouds to retain infrared heat.  That's carbon-free water vapor.  The other greenhouse gases are too small in quantity to drive the climate in any capacity.

As a transitory caveat, the only greenhouse gas exception is a conditional one.  And that exception is Sulfur Hexaflouride.  If that stable, man-made compound becomes a common household item, then we actually will be trouble . . . if and only if.  It is necessary to deep-six Sulfur Hexaflouride sometime in the near future, and to search for a substitute compound now.

Sigourney's timing, in boldly proclaiming what she did, was ironic.  This is because she publicly recited her script one calendar year after the Antarctic Continent had it's largest "sea ice extent" in its known history.  This was also a year after it was found that the bottom of the Ross Shelf was crystallizing in ice, and not melting away.  In fact, Sigourney's Democratic National Convention speech was two years after the coldest Winter in 40 years.  Her script writer was apparently clueless to atmospheric science, weather history, and oceanography.  In fact, the cover of Sigourney's Democratic National Convention script should have read, "For morons only."

It was double ironic that Sigourney spoke as a card-carrying prophetess, due to the fact that five years after her prime-time speech, Antarctica would have it's coldest Winter in known history.  Her speech writer definitely didn't see that one coming, and it basically would put anyone out of the prophesying business.

MOREOVER, Weaver spoke her words the year after Planet Earth underwent its 16 year-long "Global Warming Hiatus."  That was the time span when no temperature rise was detected in the middle of the Troposphere.  It endured from 1999 to 2015, necessitating propagandists to change the name, "Global Warming" to :climate change."  In now changing the name, Global Warming, to Climate Change, the propagandists admitted that Global Warming had ceased ... at least for 16 years ... as well as during the 1960s & '70s which was called the "decline" in Climategate emails ... and even in the first part of the 1990s, when cold and snow made headline news.  So, Sigourney Weaver 's script writer struck out. 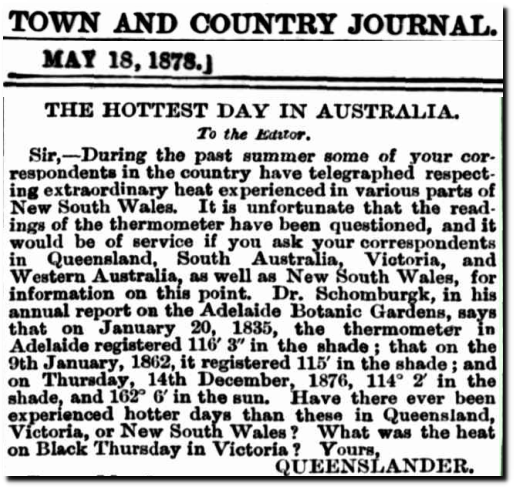 Below: Now for America:  Evidence shows that 1878 was deadly in the States, too.  Yet, co2 was too low to have caused the heat, according to the Al Gore Theory of Climate.  Thus, why would anyone in his right mind think that co2 all of a sudden drives the climate today, when there was not enough of it in the 19th Century to cause the major droughts and heatwaves which occurred directly after the end of the Little Ice Age?  The conclusion is that Al Gore and Hockey-stick grapher, Michael Mann are con artists who need to be brought to justice, due to the tremendous amoun of money that ended up in their pockets, from claiming the co2 today is too high and is causing never-before-seen heat events.  Well, they were never-before-seen, except for the past 6,000 years, in intervals of time ... in cycles of time.  The evidence thus far shows that . . . Climate IS cyclical.  But, of course, you can't make lots of money saying that truth.

Since 1988, "fund-raising scientists" and political figures kept stating in public that humanity has 10 to 12 years to get rid of half of the trace gas known as co2, or else the world will come to an end.  They asserted that:

{1} The sea level will rise, drowning millions along the coastlines, thereby resulting in the Statue of Liberty submerging into the Upper New York Bay.   No, wait!  {2} Drought will takeover the world and the ground will become too hard for planting crops, causing mass starvation.  But before that, millions will die in yearly heatwaves that will catch all of London on fire.  No, wait!  {3} All the diseases of the world will come out of the melted Arctic permafrost and will kill everybody, even though there has only been one Russian Arctic anthrax outbreak in Russian history, resulting in one and only one death.

No, wait!  {4} All of the Himalayan glaciers will melt and cause everyone in Southern Asia to thirst to death.  No, not that.  Instead: {5} There will be no more snow storms and the dams will go dry.  No, no, no. {6} They'll be too much snow falling.   Hold it.   {7}  Forest fires will burn everyone in California.  No, wait! {8} Californian forests  will contract bacteriological infections that will kill all the trees and all the birds in the trees.  Plus . . .

{9} The oceans will turn acidic corrosive and will cause all the fish there to dissolve.  No, wait!  Better yet:  {10}  Wild animals will come out of the woods and attack humanity.

However, in reality, during a congressional hearing, it was literally said that: {11} The animals have gotten smaller, even though the large fossilized animals --- such as 6 ft tall penguins --- existed when co2 levels were really high.

Then came the assertion that elevated co2 ... {12} ... will cause people to become stupid and be unable to read, preceded by a decade of faulty decision-making.

Next comes the second biggest thing to come out of the mouths of activists:  {13} August will have no ice in the Arctic really really soon.  This iceless Arctic prediction has been occurring for decades.  None the less, 2012 was the year of the least amount of ice cover over the Arctic Ocean, to the tune of 1.32 square  miles of ice cover.  In order to drive or fly from one end of that ice sheet the its opposite end was equivalent to driving from Fargo North Dakota to San Diego California ... literally.  And that was when Arctic ice was at its lowest, after five or six months of the sun never being covered by the Earth's horizon.

Now for the grand event of every year . . . year after year, until we yawn ourselves to a state of much welcomed and much needed unconsciousness

... They've been crying wolf, over and over again, in order to get Congressional Funding and NGO Money Grants.  As a result, the grown-ups of America became tired of hearing the predictions that never come true.  So, the politicians and the "fund-raising scientists" targeted the youth, doing so with the help of the commercial & subscription media, as well as the teachers' union  ... telling the youth terrifying tales that still don't come true.  The end of the world keeps getting postponed.  Yet, it's always around the corner.  It's a tiring and blatantly annoying con game.

In reality, the climate is cyclical, and everything therein is a repeat performance of another era of time ... and never "unprecedented."  On occasion after occasion, outright fraud has been committed by "fund-raising scientists" and politicians looking to inject money into their districts (or states.)  Money is always the motive.  After all, if you tell Congress that all is fine --- and that the world isn't coming to an end in 10 to 12 years --- you get no funding.  It's that simple, and they are that much a crew of simpletons that they think that the grown-ups haven't noticed their very sick game.

Below: Yet another piece of evidence showing that there was excessive heat 144 years ago, when co2 levels were too low to cause Global Warming.  Yet, the Globe warmed many a times, when co2 levels were not much higher than during caveman days.  So, you need to truly awaken, and discover that you are in the middle of a massive, money-making swindle, where you are expected to be nothing more than a very useful idiot.