The Thesis Statement of it all is this:  If you were to cut in half today the Earth's global atmospheric CO2 level --- as well as the 2 ppm Methane level, the 1 part per 3 million N2O level, and the 11 parts per trillion Hexaflouride level --- you would still get hurricanes, inland storms, tornadoes, blizzards, monsoons, mudslides, tsunamis, volcanic eruptions, ice calving, ice stacking, icebergs, dust storms, heat waves, droughts, pestilence, and insect crop invasions, as well as tree infections, and Crimson Tide algae blooms --- just like in days past (in decades & centuries past) when the co2 level was much lower than today.

It would all become a matter of "all that work for nothing."  Then where do you go, in your quest to stop hurricanes, tornadoes, and floods? ... lions and tigers and bears.

Today's media & politicians have willful Climate Amnesia.  Previously on the Blue Marble Album and elsewhere, it was illustrated that extreme droughts, prolonged flooding, more deadly hurricanes, longer heat waves in higher latitudes, etc have been occurring all throughout recorded history.  The years directly following the end of the Little Ice Age (1300 - 1840) are an abundant example.

One of the greatest causes of Climate Amnesia is Data Tampering.  The observation has been that certain governmental entities lowered the temperatures of the past on paper, to make it seem as if there had been a notable increase in temperature, above & beyond what the same governmental agencies stated in the 1990s & the turn of the Millennium.   It was a matter of two different generations of personnel and management.  And of course, the "tampered" charts & graphs do NOT correlate with the numerous newspaper articles, magazine articles, and chronicles which reported on the weather events in the current time when the events actually occurred.  Take a look at how the graphing has changed: 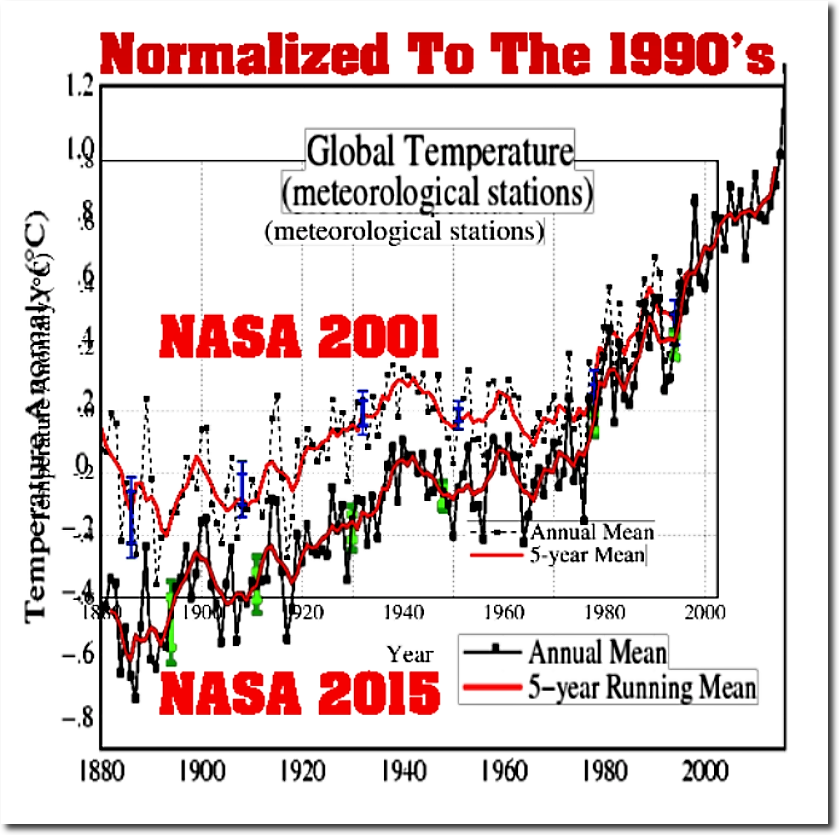