As far back as 109 years ago, the experts ... the observers ... the seafarers conjectured that many glaciers would vanish in soon enough time --- mostly, by the middle of the 20th Century; 72 years ago.  This is because, at the beginning of the 20th Century, the ice was getting thinner.  The seafarers were literally noticing Glacier Retreat, firsthand.

As far as goes Glacier National Park, it was first predicted that all of its glaciers would disappear by 1948.  It's now 2022, and those glaciers are still there.  The rates of glacier retreat were miscalculated, because the approaching temperature decline that Michael Mann would hide was not taken into account.  That decline was predominately in the 1960s & 1970s, with some of it in the beginning of the '90s. account.  As far as goes the more recent predictions of all the glaciers being gone by 2020, that was scientifically unfounded.  That was a political ploy, to create enough fear amongst the citizens, to have them plea for scientist intervention, to keep the glaciers in tact.  No human needs a glacier.  Humans need warmth, and so too do their crops.

The bottom line is that it is 100% false to claim that the world is going through "unprecedented glacier decline."  Being that this exact same thing occurred in the 1910s, '20s, and '30s, it's not unprecedented.  This has been occurring, on and off, for over a hundred years.  It's the same old same old, illustrating that Climate is Cyclical.

Always remember that the scientists claiming "a clear & present climate crisis" have a financial CONFLICT OF INTEREST that will cost the American taxpayer even more than the present $31 trillion national debt.  Firstly, the scientists make their money on claiming that a crisis is occurring somewhere in United States Taxpayer Jurisdiction that only they can solve, provided that you pay them lots and lots of taxpayer dollars.  They say what they say with the intended goal of getting YOUR TAX DOLLARS into their pockets.  That's how they make their money.

Only people who have no financial interest in stating "it's-true" or "it's-a-scam" have the right to assess the credibility of the present greenhouse gas assertion that [a] 2 per parts per million of methane is going to cause the world to come to an end, along with [b] one part per 3 million of Nitrous Oxide, [c] co2 which exists at less than one-half of 1% of the atmosphere es  of either yes or no, as true the credibility of that hysteric and overly exaggerated assertion.  At this point in time, the two things which are 100% sure is that 1} Planet Earth is NOT at a point of no return, 2} Climate is cyclical.  Within that cycle are very nice weather seasons and very deadly ones, depending on the stage of the cycle.

Secondly, in order to get your dollars into their pockets (via congressional funding or ngo funding), they have to create a catastrophic disaster that will result in the immediate end of the world, without their taxpayer-funded services.  Third, they constructed a narration of pending doom which is really easy to refute, concerning what was stated in congressional committee & subcommittee meetings.  Her is an example of the Climate Change Movement being a total farce:

A certain individual who should be prosecuted for lying to Congress stated that the added atmospheric co2 will soon make all the ocean corrosive, killing all the ocean life.  He said that this will happen when the ocean water's PH reaches 7.7.  STOP right there.  This was a blatant lie that even someone as clueless as an American politician could catch.  Observe . . .

Newsflash:  Planet Earth can survive without them.  What mankind needs is freedom from the which will injure, impair, or even kill the body over time.  That would be synthetic chemicals of varying sort.  Money needs to be invested in that scandal ... not in going to war against life-giving co2.

Let's review once again:  Claims of melting glaciers were in progress as far back as over one hundred years ago.  This is NOTHING NEW.  The concept of "global warming," "climate change," and "glacier retreat" existed over a hundred years ago.  Yet, all of those glaciers are still with us to one extent or another, except for the Okjökull glacier in Iceland.  One missing glacier isn't the End of the World.  In fact, it's cold temperatures that kill humans, wild animals, pets, crops, leafage, etc. 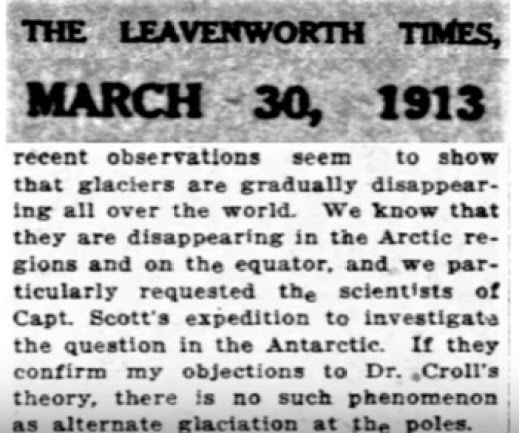