The Earth's lower Tropospheric temperature anomaly for July 2022 was +0.36C.  London had one day of 100+ degrees Fahrenheit and one day of 99F.  History repeated itself in France (though not as tragically as in 1911, 1976, and 2003).  In addition, secrets formerly hidden at the bottom outer edges of Lake Mead have been uncovered.

The commercial media put loud speakers in the minds of its viewers, telling everyone that, as of July 2022, the End of the World had started ... and its all your fault, for driving cars, riding buses, and using that clean energy known as natural gas.  So, the commercial media & the social media placed July 2022 in neon-lights and then proceeded to present it in a false light.

Question Number 1:  When Lake Mead was constructed, how many people lived in the Southwestern states of Nevada and Arizona?  How many were projected to live there, in future years?  So, how many more people came to use Lake Mead water, as the decades progressed?  It wasn't co2 consuming Lake Mead water, it was humans, their pets, their lawns, and their farmland.

Lake Mead is attached to an entire waterway circuit, where water could be redirected away from the path to Lake Mead to the path to  . . . Lake Powell.  Lake Powell water levels were getting too low, in 2022.  So, Lake Mead was put on hold.  Thus, it was NOT co2 that was consuming Lake Mead water.  It was Lake Powell doing so, along with the increased population serviced by Lake Mead.

The media's assignment was Lake Powell.  It concentrated on Lake Mead instead, for effect ... for theatrics ... for scaring people into submitting to the Al Gore man-made-co2 end-of-the-world tale.

Below is an example of the sleight-of-hand fraud, mingled with outright lies, that is now an ongoing enterprise in the commercial media and even in "social media:"

Read (or look at the pictures):  Greater London's 610 sq mi range has been having almost half the fires of decades past, despite the continuous rise of co2 throughout the same number of decades.

Now for the Southwest of America Saga

Next, the two medias (commercial & social) have been declaring that the American Southwest is engaged in its worst drought in 1,200 years.  The same medias declared that the Southwest has been undergoing a drought for the past 20 years.  And of course, photos of the man-made Lake Mead have been repeatedly shown.   It's located in Arizona AND in Nevada.  So, it looks like mankind has finally reached the turning point in its existence, where it's now ushering in a massive "extinction event" with all this drought ... according to the two kingdoms of media.  Now for the truth:

{1} Did you know that Arizona has a Monsoon Season?  Well, it does, and throughout July 2022 (when the media was telling you that this is the hottest and driest Summer ever), Northern Arizona was having above average rainfall.

{2} In addition, Nevada also has a Monsoon season.  In fact, the Las Vegas Monsoon season of 2022 was reported to have been its WETTEST Monsoon season since 2012.  Hey wait!  The Year 2012 was the year of the great drought.  How does Nevada get above average rain during a drought?  How does that work, again?

{3} Lake Mead's water level rose in the hot hot & dry dry Summer of 2022, due to repeated rains on a land that was reported to be in a 20 year drought.

Do you feel "lied to" yet?   If not, then look at the exhibit below and the articles linked below: 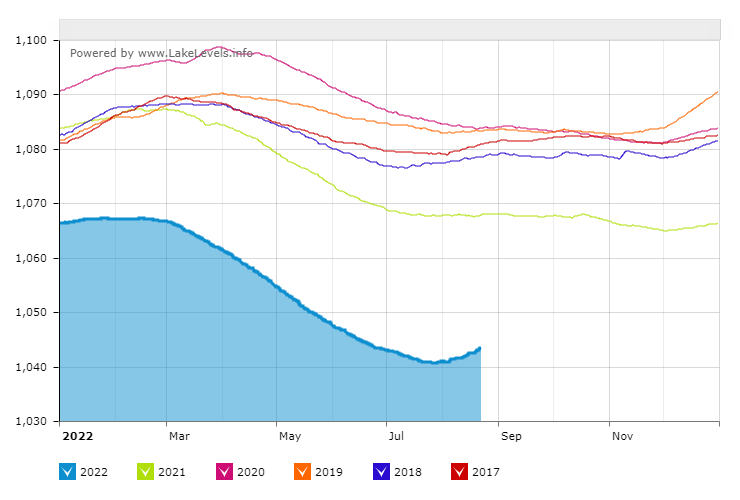 It wasn't a matter of juggling numbers in a statistics circus.  It was a matter of omitting the numbers and facts of various regions throughout this globe.   After all, the media harped on "Global Warming" without including the whole globe into the conversation.

None the less, when weather events occur which prove wrong the doomsday predictions of the Climate Change activists, the media simply puts a false slant on the event which disproved the Climate Doomsayers.  Example:  Instead of saying, "Oh the drought is over, at least for now," the reporters will say, "flash flooding," and/or "unstable rain," --- "rain on a land not suitable for rain" --- caused by the burning of fossil fuels.

All in all, you have been told a book shelf worth of lies by the Climate Doomsayers.  They will use angle shots and isolation shots, etc to make the scene look like doomsday.  They will sound negative in every aspect.

They are, of course, the most asinine people in the history of mankind, because they claim that "going green" consists in diminishing the only molecular compound on Earth which triggers photosynthesis and the budding of Earth's greenery.

The truth is that, if you want to "go green," you must first increase (or simply let be) the level of CO2 in your atmosphere.  The only thing that makes anything go green is CO2.  Yet, the Climate Activists are trying to rid CO2 from the planet.

This is equivalent to draining all the air out of your race car's tires, in the hopes that doing so will result in your victory.  This, ladies & gentlemen is a case study in Public Insanity which is actually a by-product of laziness & presumptive arrogance.

More examples that disprove the media's claim that July 2022 was the hot & dry beginning of the End of the World:

One month prior to July 2022 was when the Tropics enjoyed the coolest June temperature anomaly in 22 years.  Yet, an American government agency reported that Planet Earth experienced its hottest June in human history.  Of course, this is instantaneously recognized as a lie, in light of the recently assessed Roman Warm Period proxy evidence, as well as the Minoan Warm Period findings of old.

Then another U.S.government agency tuned-in, and reported that June 2022 was the SIXTH hottest June in the past 143 years, making things appear more believable.

Canada experienced a cool Springtime in 2022, to the point of later experiencing record colds in Mid-May & Late May.  In fact, Vancouver had the coldest morning ever, in April of 2022.

Yet, instead of highlighting the fact that Vancouver experienced a notable temperature anomaly of MINUS 1.5C in April, one of the headlines stated that Vancouver failed to break the all-time record for April, as if you were officially not allowed to regard the Springtime of 2022 as being worth your attention.

None the less, the remarkable cold spell came only three months before the start of the July 2022 heat incursions.

Also in June 2022, Australia was having record cold in as far as goes the duration & persistence of cold fronts.  June 2022 was the longest streak of cold in 70 years, thereby offsetting any claim that June 2022 was the hottest June in recorded human history.  In as much, certain members of NOAA must be fired.

During the month of May 2022, Brazil went through record colds.  However, cool temperatures in the Spring and Summer months are too hot to handle, even when they occur during the Southern Hemisphere's Winter season.

Speaking of the Roman Warm Period, the Univ of Arizona reported on the bristle-cone and tree ring findings of the Headwaters Region of the Rio Grande River, Colorado.   The surmise was that the Roman Warm Period in Southwestern America comprised a "multi-century period of unusual dryness between 1 and 400 AD, including an extreme drought in the 2nd Century."  Thus, things were far worse long before the invention of the combustible engine.  This era was when the atmospheric co2 level was 138 ppm LOWER than today.

Ironically enough, the month of July 2022 didn't have the highest temperature deviation (anomaly) in the past 12 months.  October 2021 did.  So, where were the end-of-the-world Global Warming sermons during or after October 2021?