The cause of Leeward mountain-side deserts, such as are in California

a} That which is called the result of "global warming" is actually the result of Adiabatic Heating which occurs on the the Leeward Side of mountain ranges; mostly the east side.   This is because, as clouds rise up the Western side (aka the Windward Side) of a mountain range, they release moisture during the ascent.  This is known as the process of Orographic Lifting.  This lifting of a cloud mass accompanies the release of rain as the clouds' ascent continues.  By the time the same air mass reaches the top, all that is left is a cold & dry parcel of air which descends the mountain range, thereby creating deserts.   There is the matter of heating which occurs during the air parcel's descent.

b} The dry air parcels which descend mountain tops are called :::  ~Foehn Winds,  ~Chinook Winds,  ~Santa Ana Winds,  &  ~Down-sloping Winds.   As a dry air parcel descends a mountaintop, it encounters higher & heavier pressured air which easily exists at the surface of the Earth.  As a result, the down-sloping air compresses and shrinks in size.  This causes the molecules within it to collide and vibrate more aggressively, resulting in a sudden rise in temperature.

c1a} Proof that this dryness is the result of Adiabatic Warming, and NOT co2-driven Global Warming, exists in the fact that, when you are out West, you notice that the clouds in the sky never cross over the mountain tops.  The clouds stay on one side.

c1b} Incidentally, I'm the son of a native Wyoming gal.  In fact, I have literally been at the southernmost tip of the Rocky Mountains, in New Mexico.  I witnessed it.  I was there.

At this point it would suffice to state that the vast majority of Climate Change activists need to do something called, "go outside," and not merely to the park.  People who worked in the outdoors hour after hour and year after year have a more clear understanding of weather behavior, simply by means of decades of experience.   Back to the matter hand:

c2} Examples of deserts created by Adiabatic Heating  :::  The Red Desert of Wyoming is in the center south of the State.   Plus, the center of Oregon has a desert located east of the Cascades and south of the Blue Mountains.  The Leeward Side of California is desert land extraordinaire, and it was that condition long before 21st Century co2 levels increased.  Etc go the examples.

c3} Plus, the super large deserts of the Earth are all on the 30th parallel (north & south) wherever the desert was not the result of Leeward Adiabatic Warming.  30th Parallel deserts were caused by very large "convection cells."

Example  ===>  The Sahara Desert is the size of the USA, and 6,000 years ago the Sahara was a lush forest/jungle, with cave wall drawings that looked like the ones in France.   This time span is known as the African Humid Period.  There were no gasoline engines to turn the Sahara into a desert.  It was a major convection cell at the 30th Parallel that caused it.  The super large convection cell still exists.  It's presently called the Hadley Cell of the Northern Hemisphere.

When viewing Globes or spherical maps of the Earth, do not forget the 23.5 degree tilt (aka obliquity) of Planet Earth. 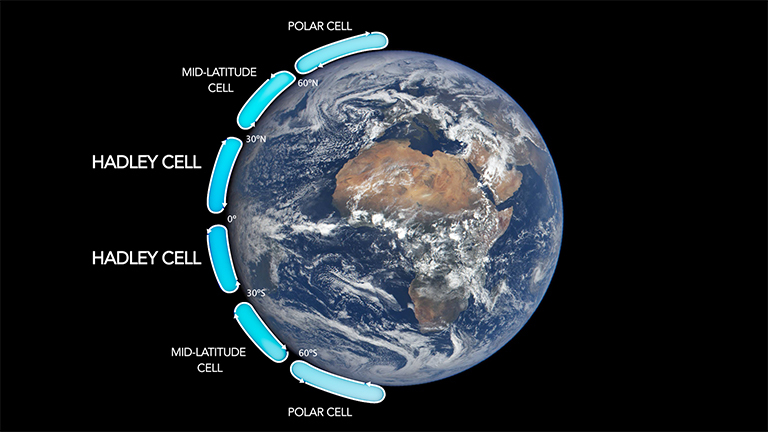