If it were true, you would always be exhaling smog. 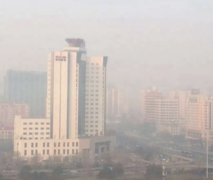 Moreover, 90% of all greenhouse gases, by volume, is carbon-free WATER VAPOR.  This is only logical, because the surface of Planet Earth is 71% carbon-free WATER.  Plus, extremely small amounts of the following carbon-free substances are also in the atmosphere: Neon (19ppm), Krypton (1.15ppm), Helium (5.35ppm), Hydrogen (0.53 ppm), Ozone (0.07 ppm), Xenon (0.09 ppm), and a few other things at low concentrations ... even trace concentrations.  So, where's all the carbon, you climate crisis activists?

For the record, if you want to mathematically include water vapor into the equation, you subtract small portions of Nitrogen, Oxygen, & Argon as follows.  Now remember, water vapor is in differing concentration in different skies of the Earth.  It exists from 0.1% (deserts) to 4% (the Tropics).  So, you adjust the math as follows:  PS:  That chart came from the United States government.  NOAA.

Preliminary note with irony attached to it:  In having been in construction as far back as 1992, (with respiratory allergy sabbaticals taken in-between --- along with one steel-beam-crush injury sabbatical)  I have already met all forms of humanity.  And on occasion, the subject of "Climate Change" did emerge instantaneously.  The only ones who believed in the claim of fast-approaching Doomsday Climate Change were {1} recently graduated high school students who have very few years of life experience, and {2} people in local government who don't even know the percentage of CO2 in the outdoor air.

Everyone else said either "The whole thing is bull crap" or "It's not as bad as 'they' make it out to be."   These people have had the experience of living in Earth's atmosphere decades longer than a newly graduated high school student.  They speak from much longer experience.  And of course, as far as goes small time politicians, they're just like big time politicians, in being mynah birds, video recorders, and/or robots, rattling off bumper sticker slogans and predictable clichés.

The reflex action to dispel Climate Doomsday Rhetoric is especially the case for geologists who do not receive taxpayer-funded paychecks.  The same goes for any tradesman who worked outdoors for the past 20 to 25 to 30 years.

Now, this concerns the claim that today's trace amount of atmospheric CO2 is causing the End of the World.  The typical geologist mentions the tremendous amount of CO2 which rockets out of the typical erupting volcano, followed by no Global Warming heatwave resulting from the sudden unleashing of CO2.  Meanwhile, the typical 25-year tradesman simply says that "climate is cyclical."  Therefore, the common citizen, and therefore the reasonable human, thinks that the alarm of a fast-approaching climate change extinction-event is senseless buffoonery.

In addition, the pertinent charts & graphs of the 1990s (which outline the temperature, sea level, and frequency of weather events of the prior 100 years, 500 years, and 1,000 years) have been decisively altered and do NOT sing in harmony with newspaper reports & chronicles of the same years, same decades, and same centuries represented in those graphs.  This is known as Data Tampering, and the newspaper reports of old constitute the numerous pieces of evidence which prove the "newer" charts & graphs to be fraudulent.

Example:  A "newer" NOAA graph claimed that 1920, 1921, and 1922 were among the coldest years of the 20th Century.  Go and look through the newspaper archives for those years, and see for yourself.  Those were heatwave years, marked my notable ice melt  around the Arctic Circle regions ... those years were as heated as the 1930s, and they were the opposite of the basically frigid 1960s and 1970s.  Look for yourself, so that you'll see that something does NOT match, concerning news reports of old and today's "new and improved" weather event charts and temperature graphs.

2nd Example:  Today's wildfire frequency chart only begins at 1983, the year of the lowest amount of forest fires & wildfires.  The REAL data goes back to 1916.  There were motor vehicles that could track and measure burnt forest land very effectively.  The Years 1926 to 1943 were the years of massive forest fire frequency.  Today does NOT come close, in burnt acreage.

Now, that which is more interesting goes as follows:

Concerning the key players in the man-made-co2 "Climate Change" hysteria, everyone knows who Al Gore is.  And everyone definitely knows who Bill Nye is.  Well, NOBODY knows who Michael Mann is.  Now, he's the one whose horn gets tooted the most by the most "liberal"of  media members. Yet, nobody amongst the common folk in America knows who he is.  That is a major crash-and-burn for a self-centered narcissist such as Michael Mann.  This also shows that the commercial media, the public TV media, and the various Bill-Gates-funded entities failed at their own propaganda ploy.

The first indication that the CO2 Doomsday Narrative has been a lie from Day 1 consists in the fact that, if CO2 were the pollutant Al Gore said it was, then you would constantly be exhaling a very visible form of carbonized soot --- something equal to cigarette smoke or coal dust.  Your breath would be a color ranging from gray to brown to black.   You and everyone else would need to clean the soot off your shirt/blouse every evening.  After all, pollution  is ====>  unburnt fuel.  This is not to be confused with particulates which are produced during the unavoidable abrasion of machine parts ... or engine parts.

Moreover, all those photos of active smokestacks shown on-screen, while being presented as CO2 polluting the Earth, were false-light misrepresentations.  The visible part of those smokestack emissions were gaseous compounds other than CO2.  CO2 is odorless and colorless.  It's also harmless when under 2,000 ppm.  It's not deadly unless you're exposed to 84,000 ppm for an hour.  So compare:  416 ppm outdoors today vs 84,000 ppm in laboratory conditions.

Your breath is proof that CO2 is colorless.  Look into a mirror.  Are you a fire-breathing dragon?  Are you a coal-dust-exhaling dragon?  Well, the average human exhales 1.6 to 2.3 lbs of CO2 per day.  Yet, each one's breath looks clear.  That's enough of an indication that you've been conned by Al Gore & Michael "hockey sticks" Mann.

There are a number of observations in front of your face ... in historical logs ... in monastery ledgers ... in almanacs ... in newspaper articles dating back to the 1600s ... in maritime charts & reports ... and in "proxy evidence" ... which show that this Chicken Little Hysteria is a complete con game.  You need to look around and test the "end-of-the-world" assertions for cracks.  You will find many cracks.

This example concerns the very false claim that elevated co2 levels set London on Fire in 2022.  The London Fire Brigade reported enthusiastically in 2014 that yearly fires throughout the 610 square mile region of the London vicinity had been reduced to approximately half of the number of yearly fires of the 1980s & 1990s.   In fact, the Year 2021 was the record low year in London Area fires.

Dry heat from Africa caused the two days of a major British heat anomaly, in 2022.  Not CO2.  After all, the same co2 level caused the least number of fires in London's statistical history, the year prior.  Look at the London Fire Brigade's own chart, to see that you were the recipient of multiple lies in 2022.  Incidentally, London Statistical History began in 1966.  That was the year when the London Fire Brigade started keeping score on its fires. 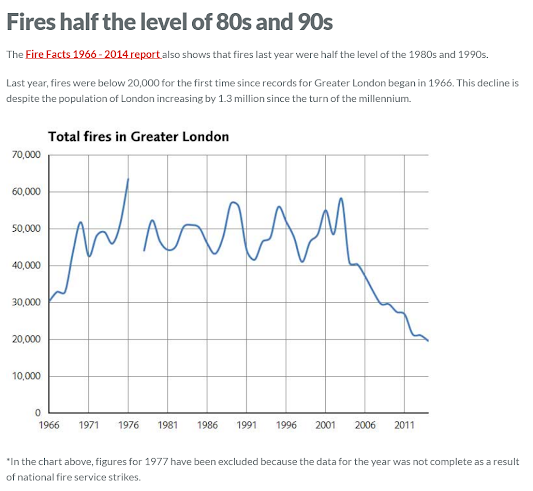