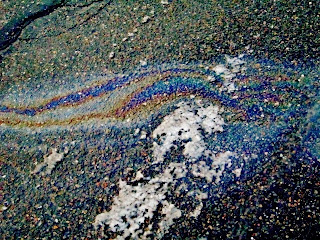 "Imagine a strange metallic taste and magnify it at at least
50 times.  Then imagine it pervading your nose, throat,
larynx, tongue, bronchi, and brain  . . .  smashing you
completely."

"A very weird state.  Hard to explain.  Almost the feeling
one gets when exposed to subzero temperatures.  Your
membranes seem to get anesthetized.    Yet, they make
their presences known, despite the absence of sensation."

She was now practicing Avoidance.  This is the practice of avoiding
the airborne agents that trigger one's asthma.  It's a practice advocat-
ed in Report 4 (A-98) of   the AMA's Counsel on Scientific Affairs.

On the woman's mind at this point in time was her plan to go to Hunts-
ville, Alabama and search for an apartment there.  This created hope-
ful optimism in her.  Job opportunities were opening in Alabama, and
a physician told her that moving away from Johnson City could reduce
her frequency of asthma.  This optimism negates any suspicion that her
ills were triggered by anxiety or depression during this time span.

She went to a grocery store, in order to buy some last minute items for
her trip.  She had been in the store for only a minute, when an asthma
attack was triggered.  After all, the store was laden with strong odors,
and the AMA has already defined strong odors as asthma triggers.  On
this occasion, her inhaler took much longer than usual to work.  On this
occasion, she became disoriented for the first time.  On this occasion,
she had entirely lost her sense of direction.  An EMS crew had to drive
her home.

Being that her trip had been arranged, she convinced herself that she
could travel.  So, she and her son left for Alabama.  En route to her
destination, she suddenly became sensitive to vehicle exhaust fumes.
Her face seemed to get hot and swollen, while a gland near her ton-
sils seemed to enlarge.  Chest tightness & asthma then set in.  It felt
as if a 10 inch ball of burning fire (exhaust fumes) hit her in the chest,
spreading throughout her entire body.  She could taste the petroleum
odors.

In having become too weak to continue the trip, she searched for an en-
vironmentally friendly hotel.  Her son finally located a room that seemed
suitable for her.  Yhe result was that the irritants triggered another asth-
ma attack.  She was placed on oxygen for six hours, and given breath-
ing treatments via Xopenex, Atrovent, and Salmeterol.  She was given
the intravenous form of steroids every four hours.  That night, while in
the hospital, her blood pressure dropped drastically.

She had been diagnosed with: (a) Acute and severe asthma attack, and
(b) Hypopotassemia.  Objective medical findings already noted on re-
cord, were:   (a) labored breathing, (b) wheezing, (c) rales, (d) rapid
heart beat, (e) gruntled sounds.  This negates the defense attorneys' al-
legation of mental illness.  Then came the October 2005 rhinolaryngo-
scopy whichindicated the presence of  a physical illness much more in
depth.

She recalled being barely able to function in Huntsville.  Yet, she and
her son attempted to explore the city.  When waiting for a traffic light
to change, she started to become hypersensitive to exhaust fumes once
again.  She had another asthma attack.  This time, her inhaler did not
seem to help.

Wwhen driving back toward the hotel, she completely lost her sense of
direction once again. This is the second time that this happened.  EMS
personnel escorted her back to the hotel.

She went to a health food store.  Her son went inside, while she waited
outside.  He bought rosemary juice and suggested that she put some in
her bath water, thinking that a warm bath would help her.  Being that
she had always enjoyed the odor of Rosemary, she put a small capful
into the bath.  It was a mistake to have done that.  The bath was relax-
ing, but upon coming out of the tub, she starting to feel warm, and then
faint, being unable to take in a full breath.  For the third time on this trip,
she became totally confused, while feeling very lightheaded.   Her son
called EMS, and en route to the hospital, she was administered oxygen
and an IV.  At the hospital, she was given saline.

She realized that it was not possible for her to live in Huntsville, being
that it seemed to have a lot more vehicular exhaust than did Johnson
City.  Yet, she felt that she had to complete the trip to Tuscaloosa as
planned.  She did.

She spent 3 days in Tuscaloosa with friends and  had trouble breathing
outside their house as much as inside of  it.  Her friend smoked indoors,
so she stayed with her friend's sister.  She went to a Chinese restaurant
with friends, but had to leave, because of  its indoor air quality.  It was
the familiar type of irritant airspace.

She and her friends went to Books-a-Million.  She would spend many
hours there when she lived in Tuscaloosa, with no problem being there.
This time, however, she had been seated for no more than five minutes,
when the aroma of coffee became too noxious to her.  Another asthma
attack was  triggered.  So, she went outside and resorted to her inhaler.

Late that night, her friend's sister turned on a gas heater.  An ensuing
odor made the woman sick, bringing her close to having another asth-
ma attack.  She had to sleep next to a window, while wearing a filter
mask throughout the entire night.  Her friends then took her to church
the next day, and she sat next to the open back door, wearing two fil-
ter masks.

She went back to Johnson City that week.  On the way back, she got
stuck in traffic.  She became ill once again.  When she finally reached
home, she collapsed out of weakness.   She also had a headache, a
sore throat, and chest inflammation.  This collapse mode lasted for the
next few years.

Since April, 2003, she had varying degrees of tightness in the chest,
along with asthma, nasal pain, burning, and congestion.  She took all
of her prescribed medications, and resorted to wearing activated car-
bon masks much of  the time.  In addition, she has a car interior air
cleaner, as well as dust screens for the car.  This helps, but she is
still able to smell odors, even through the carbon masks.

There were two doctor's appointments that she was unable to keep.
One was missed because she couldn’t find the doctor’s office in the
midst of another irritant response to exhaust fumes.  The other physi-
cian had his office in a commercial building downtown.  As she was
approaching the entrance, she caught sight of nurses smoking.  She
knew that she would not be able to make it down the smokey, fra-
grance laden, and cleaning agent laden corridor.  Her need to find a
primary care physician was pressing.

She found two doctors at a nearby university who understand her type
of medical condition.  They did all they could to help her.  She was ap-
prehensive on her first visit to one of the newly located physicians, and
it was with the utmost self-control that she waited in the waiting room.
This was due to her extreme sensitivity to fragrances and various clean-
ing agents.  Blood tests were ordered after a lengthy consultation.  Yet,
en route to the testing  area, she started to feel ill again, more so than
previously.

She was once scheduled to take a CT scan.  The building where the
scan was to be taken was a bit worse than the building where she had
previously been.  The technician had the woman go into the machine
promptly and performed the scan.  Meanwhile, she began to feel light
headed.  It seemed as if a metallic smell were causing it.  In fact, she
had to be helped out of  the room, after the scan.  She felt dizzy, even
to the point where she felt that she was about to pass out.

She remained ill up to 48 hours after the CT scan.  After the scan, she
was short of  breath.  But, this form of  shortness of breath was much
different than the previous bouts.  It appeared to be a tissue reaction,
she said; one accompanied by a hollow lack of sensation and even a
numbness.  This absence of sensation extended to her  nose, bronchi,
esophagus, trachea, and lungs.  She said that her lungs hurt.  But, it was
a dull chronic inflammation that she felt.  She described it in the follow-
ing manner:

"A very weird state.  Hard to explain.  Almost the feeling
feeling one gets when exposed to subzero temperatures.
Your membranes seem to get anesthesized.  Yet, they
make their existences known, despite the absence of
sensation."

"All this is very strange.  It's anxiety-causing, because if it's
not ameliorated, it leads to a strange sort of  “inability" to
breath.  It's not like congestion, in the usual sense.  It leads
to the desire to cough, but the cough does not lead to any
cessation of  symptoms.  I also feel as if I'm in the process
of fainting at times.  I feel shakey."

She began to feel better, two days after the CT scan.  The “hollow”
and metallic” syndrome finally resolved itself.  About this she wrote:
"Just that little exposure to the CT Scan environment made me
ill for two days!"