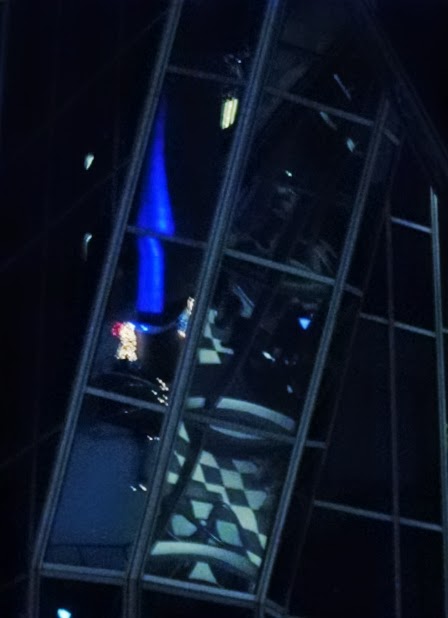 Whenever you scald your tongue on
hot tea, your tongue will still feel the
scalding sensation, even if you drink
cool water shortly after having been
scalded.  Well, there is a very similar
phenomenon in the lives of chemical
sensitivity patients. It's called masking.

The failure to consider this phenome-
non was the fatal error in a 1980s test
that ended up being obsessively used
in the anti-MCS propaganda of retired
psychiatrist, Stephen Barrett, MD.  He
once said that he was the media,  even
though he was never a household name.
It's important to keep in mind that the blatant attack dog of Big Pharma,
namely retired psychiatrist Dr Stephen Barret, MD, never worked in the
field of Occupational & Environmental Medicine.  Therefore, he has no
professional experience with those suffering from Chemical Allergies
and/or Irritant-induced illnesses.  Such conditions include Reactive Air-
ways Dysfunction Syndrome, Occupational Asthma due to Low Weight
Molecular Agents, Irritant-associated Vocal Cord Dysfunction, etc.  In-
cidentally, low-weight molecular agents are more commonly known as
chemicals.
_________________________________________________________

In his attempt to convince mankind that Chemical Sensitivity is merely
a mental illness, the Stephen Barrett who never examined any chemical
sensitivity patient repeatedly cited a "research undertaking" which was
conducted in Denver during the 1980s.  The test is formally titled:

Double-blind provocation chamber challenges in 20 patients presenting
with "multiple chemical sensitivity."   The article which detailed the re-
search undertaking was published on August 18, 1993.

The research team who conducted that test consisted in psychologist
Herman Staudenmayer (Ph.d),  allergist John Selner (MD), and chem-
ist Martin P. Buhr (Ph.d).  I was told by someone very well known in
the Chemical Sensitivity world that Herman Staudenmayer appeared
as a brooder, to state it politely.

The title of the test is misleading, in that it was not based on standard
challenge testing, such as the methacholine challenge test which mea-
sures changes in  FEV1.   Rather, the Staudenmayer test was subject-
ive testing;  the type of testing that Barrett condemned as invalid.   So,
we see another instance of hypocrisy in the psychiatrist of early retire-
ment.

Incidentally, FEV1 is the measurement of Forced Expiratory Volume
after one second of exhaling.  In addition, pulmonary experts, from my
experience, will not allow severely sensitive people to take the metha-
choline challenge test, in fear that they "might not recover" the ability
to breath.  For example, an Ivy League trained pulmonary expert for-
bid me to take the test.  In the State where I was at the time, the law
only permitted pulmonary specialists to order methacholine testing.

1) The test consisted in 145 occasions where a test subject had sent in-
to into his/her chamber an injection of air.  The test subject was then
instructed to discern if whether or not the injected air was accompa-
nied by a chemical agent.  Each of the twenty test subjects participat-
in at least one "provocation challenge."

2) The challenges were divided into two types:

a) clean air injected alone,
b) clean air accompanied by an aromatic agent.

5) The aromatic agents were called "maskers."

4) The overall result of the test, as recorded by the research team, goes
as follows:  "Individually, none of these patients demonstrated a re-
liable response pattern across a series of challenges."  The conclu-
sion was that persons diagnosed with Multiple Chemical Sensitivity
are merely psychologically ill.

The Invalidating Feature of that Test

The maskers that Barrett cited in his anti-MCS propaganda as having
been used in the "Herman Staudenmayer Test" are known triggers of
adverse reactions in susceptible persons.   That is to say, the maskers
were chemical-bearing agents.

Concerning anything aromatic, keep in mind that the AMA, the world-
renown Mayo Clinic, the American Lung Association, and the Ameri-
can Academy of Allergy, Asthma, & Immunology each recognize, in
publicly accessible print, that "strong odors" can be triggers of adverse
upper and/or lower respiratory reactions in susceptible people, simply
because they are strong odors.   This has included anise oil, cinnamon
oil, lemon oil, and peppermint spirit.

Concerning the sample list of maskers used in the "Staudenmayer Test,"
observe the following:

- An active ingredient in it is anethole.
- Anethole's chemical composition is C10H12O.
- Its CAS No. is 104-46-1.
- It is a known trigger to those adversely reactive to it.
- In fact, Anethole is known as p-1-propenylanisode.
- It is also known as 1-methoxy-4-(1-propenyl)benzene.
- Thus, anise oil is a chemical-bearing agent.

In all occasions where anise was used as a masker in a clean air inject-
ion, a chemical-bearing agent was being injected into the test subject's
chamber.   Therefore, to have recorded such an injection as one of
chemical-free air was to have recorded a falsehood.

Along with being a "strong odor," cinnamon oil is a bearer of aldehyde.
In fact, the naturally occurring trans-cinnamaldehyde unassistedly be-
comes benzaldehyde in the presence of heat.

The most prevalent constituent in lemon oil is the monoterpene, limo-
nene, aka 4-isopropenyl-1-methyl-cyclohexene.   Limonene de-
velops a potent sensitizing capacity when oxidized, and it's a reputed
skin sensitizer.   In addition, a Swedish research undertaking record-
ed the following:   "Bronchial hyperresponsiveness was related to in-
door concentrations of limonene, the most prevalent terpene."  Lemon
oil also includes the same alpha-pinene that was implicated in oil of
turpentine allergy.

Now, as far as concerns methyl salicylate, Supplement 5 of the Journal
of the American Society of Consultant Pharmacists, 1999 / Vol. 14,
states:

"Of note, methyl salicylate carries the same warnings as oral
salicylates and has the potential to cause Reye's Syndrome in
children with flu-like symptoms, as well as adverse reactions in
those with aspirin allergy, asthma, or nasal polyps."

In as much, to record an airborne injection of peppermint spirit as a
chemical-free one, is to record yet another falsehood.

The research team gave no consideration to the the masking of sensi-
tivity responses; a phenomenon attributed to the involvement of Ca2+
calmodulin phosphatase calcineurin and the ensuing dephosphorylation
that it induces.  Phosphorylation is explained in the following text:

Barrett's Predictable Response to the Test

As is to be expected, in an article written by him, Barrett recommended
that clinical researchers conduct more tests likened to the one conduct-
ed by Staudenmayer and his colleagues; anise oil, cinnamon oil, and all.