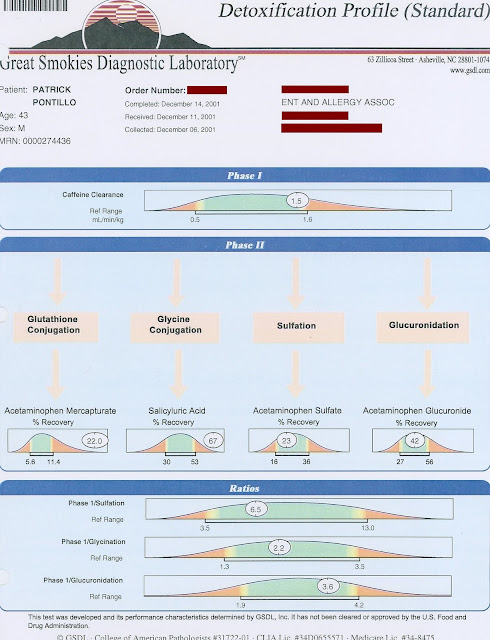 The inordinate level of acetaminophen mercapturate in the test results is a sign of a high
level of a toxic metabolite known as N-acetyl-p-benzoquinoneimine (NAPQI) which is
produced in persons hypersensitive to acetaminophen and other "Cytochrome P-450
inducers."

The damage cause by NAPQI is reversible liver damage, on the cellular level.  The
mercapturate simultaneously is produced as an antidote during a hypersensitivity re-
action.  It neutralizes the NAPQI.  Now, it is possible that more NAPQI exists than
mercapturate.  So, the test result only showed how much mercapturate was being
produced during an adverse reaction to acetaminophen.  It didn't show how much
NAPQI was being produced during the same reaction.

Also in the test result chart is an extremely high level (literally off-the-chart) of  Sali-
cyluric acid.  It is proof of salicylate (aspirin) hypersensitivity.   In fact, a combination
of salicyluric acid and glucuronic acid forms salicyl acyl and phenolic glucuronide.
Moreover ... in quotations:

"One possible origin of the type I hypersensitivity reaction is reaction of drugs such
as acetylsalicylic acid and its metabolites being complexed with human serum al-
bumin.  Albumin, being transporting molecule abundant in blood plasma is able
to bind large array of ligands varying from small single carbon particles to long
hydrophobic tailed lipidic acids (e.g. myristic acid).

This non specificity is possible because of multi domain scaffold and large flexibility
of inter-domain loops, which results in serious reorientation of domains.  Hypothesis
that acetylsalicylic acid metabolites may play indirect role in activation of allergic re-
action has been tested.    Binding of acetylsalicylic acid metabolites in intra-domain
space causes significant increase of liability of domains IIIA and IIIB.

One of metabolites, salicyluric acid, once is bound causes distortion and partial unfold-
ing of helices in domains IA, IIB and IIIB. Changed are both directions and amplitude
of relative motions as well as intra-domain distances. In result albumin is able to cross-
link of adjacent IgE receptors which subsequently starts allergic reaction.