Western Massachusetts has a three river confluence comprising the Ware, Quaboag, and
Chicopee Rivers.  A rusted walkway crosses the confluence there, and not much of any-
thing else is nearby.

The famous Triveni Sangama in India isn't a tri-river confluence.  It only consists in the
Ganges and Yamuna Rivers.  The third river is the mythical/invisible Saraswati River.
If it did exist, it ceased doing so in the past 4,000 to 8,000 to 12,000 to 16,000 years.

The Missouri River Confluence in Montana comprises the Jefferson and Madison Rivers
converging with each other and becoming the Missouri River.  This confluence is in a state
park where the nearest town, Three Forks, has a population of 1,869 people.  This means
that there isn't any potential to develop the waterways for engineering innovations, as well
as developing any type of metropolis.

Croatia has a notable confluence in an extremely natural setting.  Such settings are still
needed throughout the earth.  Planet Earth still needs oxygen-producing greenery and
clean water.

There is also the cave river in Slovenia.  Known as the Pivka, it converges with the Rak
Creek and forms the Unica River.  The cave river is a tourist attraction.

In the Sudan, at Khartoum, the White Nile and the Blue Nile make for the starting point
of the world famous Nile River.

In the Southeastern German city of Passau, the Inn River and Ilz River converge into the
Danube.  At Passau, there's a notable university founded in 1970 which is actually an ex-
tension of the much older one founded in 1622.  That university is famous for its schools
of Economics, Law, Theology, and Cultural Studies.

Passau was also noted for its craftsmanship of swords so much so that the a weapon
bearing the insignia of the Passau wolf carried prestige during the Renaissance era.
The same town was also famous for the 1555 Peace of Augsburg and the post-WWII
Displaced Person's Camp, American Sector.

Then came the development and incorporation of Pittsburgh, Pennsylvania.  As was as out-
lined in another pictorial, Pittsburgh has been the site of many technological innovations, as
well as six Super Bowl trophies and other athletic championships.

Add to this a list of stellar athletes, five Pulitzer Prize winners, stars of sound and screen,
and noted authors ranging from baseball legend Honus Wagner to Gene Kelly to Academy
Award winner Shirley Jones to Perry Como to  Rachel Carson to Gertrude Stein to dance
choreographer Martha Graham to Billy Eckstein to Mr. Rogers to Jeff Goldblum to George
Blanda to Babe Parilli to Joe Montana to Joe Namath to Dan Marino to Mike Ditka to Bill
Cowher to Curtis Martin to Tony Dorsett to Michael Keaton to Andy Warhol to Andy of
Mayberry's Howard Sprague to the Riddler of the televised Batman series to the original
Agent 99 of Get Smart fame to comedian Marty Allen.

Incidentally, proof that the televised Batman series (starring Adam West) was a designed
to be a comedy is that a rich tycoon in the show was named John Paul Spaghetti, a spoof
on John Paul Getty.  The other proof was when Batman and Catwoman shared a malt in
a malt shop, while sitting at the same table. 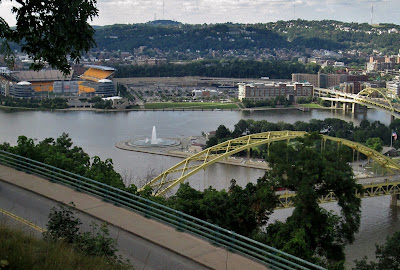 Included with Pittsburgh life is the developed craft of occasionally driving up and down
sloped streets during inclement road conditions.  This consists in spinning wheels while
going uphill and sliding past a stop sign or red light, with the brakes in use, while travel-
ing downhill.

This craft additionally includes drivers throughout the city who make room for this type
of thing, thereby preventing accidents.  The occasional brick roads in the city are slippery
in the rain, as well as in snow.  So, snow skidding is not unseen during Pittsburgh winters.
This translates into the Pittsburgh pro-democrat, pro-labor mindset.  It goes as follows:
The Pittsburgh way is to give Leeway and adapt.  This is why the 1990s were an aberra-
tion.  For those not familiar, police abuse was rampant in Pittsburgh in the 90s, and Pitts-
burgh housed one of the most corrupt and ruthless bishops in America, as is outlined at:

Pittsburgh is the City of Bridges.  It was once the Steel City.  In fact, it was even called the
City of Champions after the Pirates and the Steelers won the Super Bowl and World Series
in the same calendar year.  This was also the general time span when the Pitt Panthers won
the NCAA football crown, followed by the Pitt Panther basketball team being a long-term
contender and occasional Big East champion.

Before the Pittsburgh area became the king of steel, it was
heavily engaged in the production of glass, meaning that it
was previously the City of Glass.  However, Pittsburgh is
more essentially the City of hills, inclines, and sharp slopes.
The three rivers which mark Pittsburgh, therefore, comprise
an aquatic valley ... a glacial valley.  The Wisconsin Glacial
Flow makes for the fourth river, located 54 feet below the
Pittsburgh vicinity.

As far as goes the reputation of Pittsburgh being a blue collar
town filled with people who can barely speak English in any
appreciable fluency, Pittsburgh is the home of the prestigious
Carnegie-Mellon University, Pitt Med School, and University
of Pittsburgh Press that publishes the yearly winners of two
major literary awards.
Add to the Pittsburgh education equation Duquesne Univ., Chatham Univ., Carlow
Univ., La Roche College, the Art Institute of Pittsburgh, the Cordon Bleu Institute
of Culinary Arts, Point Park College, and the Pittsburgh Institute of Aeronautics,
as well as worthwhile trade schools.

When it comes to the blue collar realm, a Pittsburgh area construction worker needs
added athleticism and dexterity, due to the slopes and inclines of the area, as well as
due to the older parts of the city where one encounters narrow alleys and a closely
knitted infrastructure which makes demolition work and heavy equipment operating
a surgical task at times.  Plus, bridge construction and repair work always requires
added diligence, even though workers are pacing themselves and don't seem to be
working rapidly.

Now, the problem with Pittsburgh is that it's near West Virginia, and therefore, the
rural outskirts are plagued with the Hatfields & McCoys confrontational mindset.
Pittsburgh has its metropolitan culture, its blue collar culture, and an occasional
rural antagonist who is entirely misplaced, quite isolationist, and feisty at times.
They are people locked in the late 18th and early 19th Century mindset.  Plus,
Western Maryland is backward and isolationist, too.  In fact, in the 21st Century,
I saw a Western Maryland billboard, located near a convenience store, telling the
reader that the pope is the anti-Christ.  The interesting thing is that there have been
over 260 popes, but there can only be one anti-Christ.  So, which pope was the
anti-Christ?  None the less, the outskirts of Pittsburgh has its backward mindset.

Below is a pictorial of Pittsburgh's Three Rivers Confluence and the nearby terrain
known as Gateway Center.  When you add the Confluence with Gateway Center, you
have what is referred to as the Golden Triangle.  Here's the Confluence photographed
at a distance close enough to literally touch the Monongahela, Ohio, and Allegheny
Rivers.  Gateway Center is also represented here.


As a parting reminder, via rote:
The Ice Age's Wisconsin Glacial Flow is situated 54 feet below. 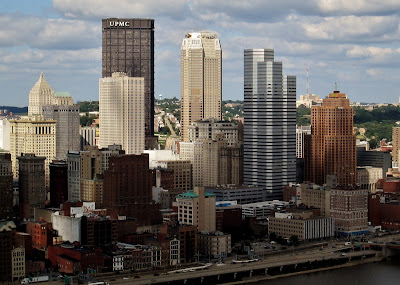