A Candelabra of Tail Lights

If a picture's worth a thousand words, then one poetic image is a chapter in a saga.
Imagery filters the distortion and static of modern life.  In as much, you sometimes
need to exercise the other circuitry within you beyond the mechanical/numerical
wiring of charts and graphs.  It prevents you from easily falling for deceit.  Upon
using the other circuitry, you discover that there's a universe within each one of us.
It's one of those discoveries that will change your life. 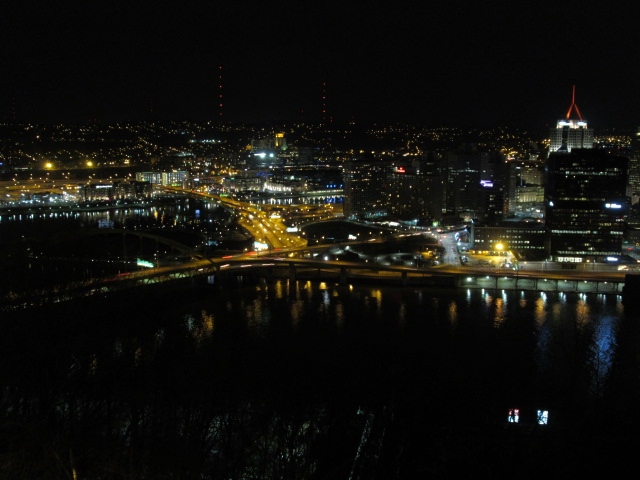 Stationed discretely,
beneath the midnight crossroads of the stars.
Standing vigilant,
precisely in the middle of night.

Here is where winds converge.
In the periphery, swaying twigs snap.
Soft geodesic spheres in the moonlight
take flight off of a dozen dandelion stems,
while brittle tree leaves scurry past an open field,
only to get caught in the long swooping stems of blackberry brambles.

These leaves,
now dried parchment,
no longer tell the story of autumn.

Meanwhile, the remaining dust of vacated anticipation
intersperses within a patch of crash landed may apple leaves
which remain attached to their dilapidated stems
in the dried puddle of moonlight.

To the east,
a half moon slowly sinks into a silhouette of tree branches,
all the while carrying within its crescent a slate black moon.
Meanwhile, at the bottom of the hill, on a road near the woods,
ghosts of fog bounce off a procession of auto headlights.

II
A newly arrived wind,
one having traveled through several time zones of emotions,
secretly etches lines on the face of an unlocated phantom
who stands concealing its thoughts,
while slowly bleeding into the night.

While streams of neon-tinted blood reach my feet,
memories begin to burn into the form of photographic negatives
transposed upon the planks of a 1960s wood burning set.

Each of the recessed memories is like a stilled reel frame
that once melted upon a fiberglass movie screen
during school hours, when the projector was stopped,
while its light bulb remained lit.

I do not want to forget loss
like a liar who stages his own amnesia
and then changes his identity within a pea & shell game
of relabeled file folders.

I cannot give tacit approval for damage left in disrepair,
by walking blindfolded past a world of cold ruins.

Nor must I block the traffic of emotions
which take an off-ramp to an intersection of uncertainty,
in preference to following a candelabra of tail lights
along a securely marked highway
traced with red felt-tip ink upon a glove compartment's road map.

I reach out into the air
and touch the raised dots and dashes of a familiar destiny,
mounted along the sill of a spacious sky.

Peace illuminates at my finger tips.

The streams of my interior instantly dilate and flow
toward the direction of infinity the same way in which they do
at the unexpected voices of unseen cardinals
heard in the middle of a snowscape on a blinding afternoon.

As I step,
the distant murmurs of assassination crinkle and crumble.

The curses of the envious dry on their branches
and fall to the ground like the bolted iron emblems of tyrants
that crash into gravity at the end of an allied invasion.

Watch dogs sit and wag their tails,
having scratched the barbed wire from their collars.

I inhale the echo of a forest's past leaves,
while getting touched with an impulse
by one of nighttime's unseen winds
that blows through blond wheaten grasses,
en route to the nearest town,
inviting me among the trees
whose branch tops of heated maroon
outline the November horizon by day
and exude the coming winter's touch by night.

As I make my approach, the instinct within the depth of night
suddenly falls into my hands, ready to flow at will
into the hands of a distant forest or nearby town.

Join the stars and immerse yourself
into that which is objectively wonderful,
and speak the snow which replaces the summertime bats
that flew around street lights in the middle of the night.

You are now free to transform into the objective of your love
within the deepest blue tint cast between a red hilltop tower light
and the compass that the paperboy left behind at the outskirts of infinity,
the night his mother died.
____________________
from Patrick Anthony Pontillo on 9/03/2022