The Forest & Wildfire history of the U.S., pursuant to the US Forest Service. This sends Climate Change Activists into sheer psychotic denial.

We now address forest fire & wildfire facts.  They're not what the media or the Biden admin claims them to have been.  Forest fires were far worse in the 1920s & 1930s & 1940s than today.  Observe:

According to the United States Forest Service's official statistics, there were FIVE TIMES MORE forest fires in the United States during the 1920s, 1930s, & 1940s than there have been in the most recent years of the same time duration.  Yet, co2 levels were notably lower during the days when raging forest fires compelled the US  Forest Service to create their first edition of the Smokey the Bear poster.

The first such poster appeared in 1944, after an 18 year period of forest & grassland incineration, to the tune of 650 MILLION American acres (1926 - 1943).   In contrast, the amount of American acreage burnt in the 18 year period comprising 2004 to 2021 was 133 million acres.  Yet, the 21st Century climate doomsayers have incessantly claimed that today's "weather events" are the most severe & numerous ones in decades, centuries, and even millennia, on account of a rise in co2 levels.  The truth is, "They're not even close."

Al Gore, overly paid climate spaz extraordinaire, was never a scientist or an engineer, and he never won the Nobel Prize in Science.   The peace prize is a different animal.

If you demand something more official, it's understandable.  Look here, therefore.  It should help with credibility.  And if you're not a sucker who instantly beliefs whatever you hear or read, then that is exceptionally good.  Stay that way.  Demand proof.  Test every decisive assertion for cracks. 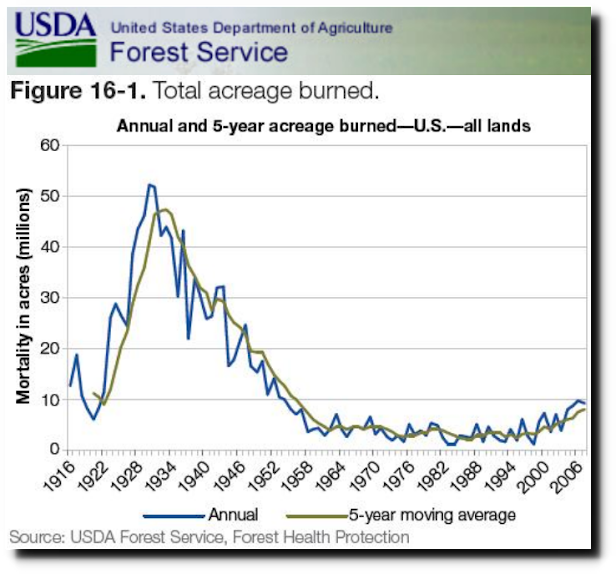 As an added example of US wildfire rates, the acreage burned in the Decade of the 2010s was 65 million.  If you double this number, making it equivalent to a twenty year span, it will amount to five times less than the 18 year span of 1926 - 1943.  There is a lot more co2 today.  Yet, there are a lot less forest fires.

So, if you are a "financially compensated" Climate Doomsayer, you'll abridge the Forest Service graph, and make your starting point, 1984.  This will deceive the viewer into assuming that 1984 was an average year, instead of the lowest.  The viewer will then think that the US is now out of control.  The viewer will feel obligated to donate money to Bill Nye's Union of Concerned Scientists or to the UN, assuming that America now has to be saved.  It's one of many sleight-of-hand deceptions used by the climate hysteria faction, as they present things in a False Light.

At this point, keep in mind one more thing:  At first, every climate spaz kept saying that the ultimate climate disasters are coming.  This included the failed predictions about the Maldives' sea level, the glaciers at Glacier National Park, and Arctic Sea Ice performing a disappearing act.  However, after years of failed predictions, the climate spaz faction now says that the climate disasters have been here all along, for the past fifty years.  Well, why didn't they say so ten years ago, twenty years ago, or thirty years ago?

CO2 Gives Life.  It Doesn't Take Lives Away.  It's the Key to Photosynthesis

The much demonized co2 only comprises 0.042% of the Earth's first layer of atmosphere which happens to be called the Troposphere.  In fraction form, co2 only occupies 21/50,000th of the aforesaid Troposphere which mostly reaches a height of 9 - 11 miles in the sky, but only 3.7 - 5 miles in height at the Poles.

In fact, co'2's radiative forcing is a humble 3.7 watts per meter squared, and such a thing can be compared to a night light, and not a military-grade flamethrower.  This shows that co2 is not in a position to be the driver of an entire atmosphere, especially in terms of turbulent climate.

HOWEVER, co2 is the driver of some of the Earth's Biosphere, by having itself absorbed piece by piece & one by one, by plant after plant, tree after tree, flowers and grasses alike, as well as sea vegetation, one living unit at a time.

The Key to Life on Earth:  Photosynthesis, the key to going green.

CO2 is the gateway to photosynthesis.   In fact, if co2 levels ever go below 150 ppm, all photosynthesis on Earth will cease.    Life on Earth will follow suit.  So, contrary to all of the doomsday hype of today, sung by those who ever-so-coincidentally make large sums of money on the hype, co2 is the first requirement in going green.

When a population increases, so too do the needs of greater crop yields.  CO2 is the catalyst of greater food growth.  To suppress it is to starve others.   So, if you want to go green, then increase the co2 levels in the atmosphere.

As was previously stated, there was an Ice Age (Ordovician) that transpired when the co2 levels were more than NINE times higher than today.  And naturally, it was the era of "calcite geochemistry."  This, this explains the high level of airborne co2 at that time span.  Equally as obvious is the fact that today's level of co2 is NOT death threatening to the respiratory tract.  In fact, US satellite operators noticed that the increase in atmospheric co2 made the Earth greener.  One of those witnesses is called NASA.

See:  NASA's Satellite Technology is a witness to the added greening of the Earth 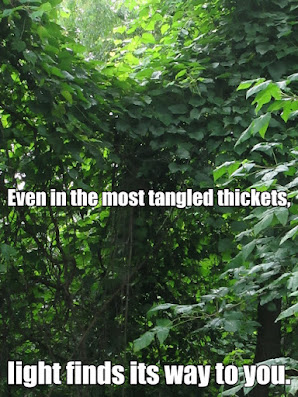