This discourse was revised into a far more detailed version, in that moe official charts were added.

Concerning a few of the London Fire Brigade charts posted there, they ever-so-coincidentally were deleted from the London Fire Brigade website three days after the revised Blue Marble Album article - writing - discourse was posted.  If you have virtual memory in abundance, you can still get the same info from the London Brigade, but only in the "buried form;" buried within a lot of other statistics.  None the less, there is enough in the revised article for you to come to your senses, if you think that CNN and other commercial & subscription media outlets are the conveyors of truth & honesty.  Include all media entities which were given donation money from the Gates Foundation, such as the Guardian.

It would help for you to understand that commercial media caters to those who buy commercial time.  Thus, whatever ingredients in the advertised products which are unhealthy ... or were obtained by unjust means ... such information of toxicity or injustice will not be conveyed from the very media networks who live off of the toxic and/or sweatshop labor products they advertise.

And of course, even subscription-based news outlets perform one form of advertising or another.  It's very simple.  The Golden Rule is this: "He who holds the gold makes the rules."

The revised article with more official charts & graphs is linked from here:

A preview of the revision goes as follows, in the form of the graph below, provided by the London Fire Brigade.  Greater London fires decreased significantly, while the Earth's atmospheric co2 level rose significantly.  Thus, the claim that co2 was causing London to burn-down is a complete falsehood.  Such liars must be held legally accountable in the future, after the chaos of today settles. 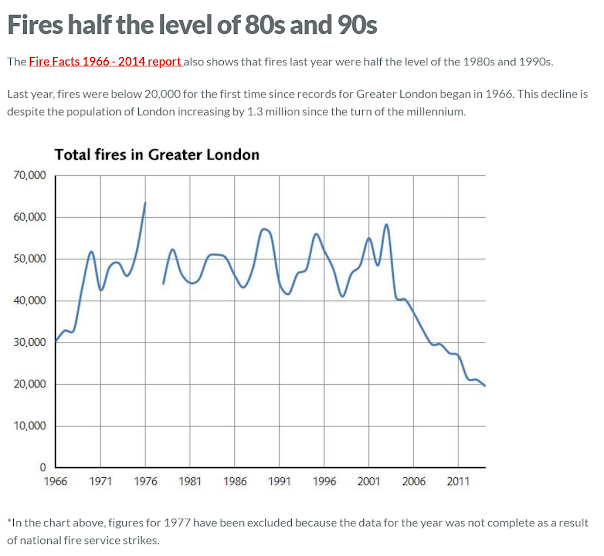