Jimmy Carter and NOT John Paul II saved Poland from invasion. (According to a former US intelligence analyst & declassified info.) 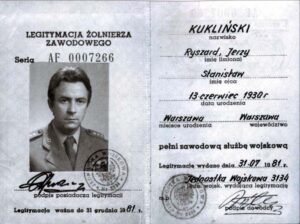 If you recognize this face, then you had a security clearance during the Carter administration.  I was in college at the time.  So, don't look at me.  None the less, the event surrounding that Soviet gentleman was literally Jimmy's last hurrah.

In December of 1980, the Soviet Union was poised to invade all of Poland, under the guise of a military training exercise with East Germany and Czechoslavkia.  John Paul II did NOTHING to stop that which Jimmy Carter succeeded at getting accomplished, through his diplomatic channels AND optical technology.  The false praise given to that cleric who allowed altar-boy molestation to run rampant is always unacceptable.  None the less, an intelligence analyst and I sat down one afternoon and talked and talked.  The near-invasion of Poland came up in the conversation.  So . . .

None the less,  Carter did mention that time in his memoirs:

”I sent Brezhnev a direct message warning of the serious consequences of a Soviet move into Poland, and let him know more indirectly that we would move to transfer advanced weaponry to China. I asked Prime Minister [Indira] Gandhi to pressure Brezhnev (who was about to visit New Delhi), and warned the opposition leaders in Poland so that they would not be taken by surprise. I and other administration officials also made public statements about the growing threat to European stability”.

On May 1, 2011, an act of cronyism was used in canonization process.  John
Paul II was beatified, and for the first time in church history a pope beatified
his immediate successor.  This amounted to the pope beatifying his former
boss.  This amounted to conflict of Interest.  None the less, the beatification
was construed to have been a diversionary tactic, intended to deflect attention
and away from John Paul II's sins of accessory in the long-term sex abuse out-
rage of the Vatican II Church.  It came to be discovered that John Paul II was
very much current on the topic, fully aware of the sex abuse epidemic.

If he weren't beatified, it would perhaps arouse the suspicions of law enforce-
ment authorities as to John Paul's culpability ... and therefore the cupability of
John Paul's employees, such as Ratzinger, Bertone, and Sodano.

Concerning John Paul, Benedict XVI should have recused himself from the
case and left the decision to approve or deny beatification to a successor, sole-
ly on the grounds of conflict of interest and cronyism.   Before approving the
beatification, the Vatican should have interviewed at least two dozen sex abuse
victims and three dozen retaliation victims.  Even as recently as April 30, 2012,
a witness to modern church corruption feared coming forth, and this individual
was a nun.

Now that the canonization process for John Paul is complete, will he be made
the patron saint of altar boys or the priests who molested them?  He did far
more for the molesters than the molested.

The insult of the beatification would result in 20,000 pages of documentary evi-
dence and an official petition being filed at the Hague's international criminal
court, during the same year.  In fact, this filing occurred on April 11, weeks be-
fore the scheduled beatification.  It meant nothing to the modern Vatican.  In
fact, according to Ireland's Prime Minister your pain means nothing to the nar-
cissists who hijacked the Vatican.  Moreover, during the same year when John
Paul was beatified, Ireland's prime minister sent a mandate to the Vatican, on
account of the crimes of clergy members in Ireland which were repeatedly ig-
nored by John Paul II.

Those who were the principle accomplices of the crimes of the modern church
are still in power at the very Vatican where they engaged in the crimes.  None
the less, the praise of John Paul constituted teenie bopper idolatry.  He was
credited with having crushed Communism, despite the fact that Communist
China now owns over $1.4 trillion worth of America's debt, and despite the
fact that the same Maoist dictatorship became an oppressive economic world
power during John Paul's reign.  The present regimes of China, Cuba, Vietnam,
North Korea, and Laos show that over a billion people are still locked in Com-
munist tyranny.

Add to this all of the other sweatshop nations which equally constitute dictator-
ships which rob people of their civil rights.  Don't forget the military junta na-
tions, such as Burma (Myanmar), and nations in chaos.  Plus, keep in mind
that many dictatorships falsely title themselves the people's republic of this,
that, and the other thing.  In addition, the Russian election of 2011 resulted
in the Communist Party taking possession of 92 seats in the Duma (Russian
Parliament.)

John Paul did little more than make vain stage appearances and curtain calls.
He succeeded in crushing the spirits of devout Catholics more effectively than
Soviet tanks crushed the Hungarian Revolution of 1956 and the Czech Revolu-
tion of 1968.

Concerning John Paul II, the bottom line is that he did not make his world a better
place as did Saint Patrick in Ireland and St. Francis in Assisi Italy.  Yet, in the pre-
dictable Orwellian con game, we were being told for years, was that the world was
now a better place.  It was a far worse place.  The economic crisis of 2008 and all
that was uncovered during it proved otherwise.  The wave of terrorism since 2001
also prove otherwise, and economic conditions which resulted in the worldwide
OWS Movement proved the same.  Yet, John Paul was praised as a one-man lib-
erator of Poland.  In as much, the truth concerning Poland needs to be made known,
simply to take people out of their hypnotic trance, concerning the media marketing
campaign of John Paul II:

Jimmy Carter is the one who Saved Poland from Invasion

It was Jimmy Carter who ordered the tactic that prevented Poland from being invaded
by Russian armored units, and it was the citizens of Moscow, along with Russian mili-
tary personnel, in their refusal to fire on their own Russian people, who brought Soviet
satellite statesmanship to an end.  Proof of this exists in what happened the very year
Carter left office.

For those unfamiliar, Russia almost rolled into Poland in 1979 and 1980, but were
deterred by one simple Jimmy Carter tactic.  Carter then left office in 1981.

Jaruzelski suddenly declared martial law, in December of 1981.  This shows that he
saw Reagan as enough of a bumbler and a paper tiger that he would test Reagan.
Therefore, it was former military officer James Earl Carter who was the one hold-
ing the Communists at bay.

The Source for the Following:

The confirmation source of the following information is a former Washington D.C.
intelligence analyst.  For the record, nothing below is classified.

In 1968, the Soviets were already halfway into Czechoslovakia before anyone knew
they invaded.   Therefore, the Soviet crackdown on Czechoslovakia was guaranteed.
However, during the John Paul years, American technology kept the West current on
Soviet troop movement.   This included the movement of Soviet armored and infantry
divisions during the near-invasion of Poland.

The Polish Crisis During the Carter Years

Being that American technology had Russia's number, President James Earl Carter
kept declassifying intelligence on current Russia troop movements and released it to
the public.  Jimmy was telling the Russians that NATO knew where they were in re-
lation to Poland's topography.  The Russians, in turn, knew that they didn't have the
benefit of stealth, as they were forced to entertain the possibility that NATO would
be their welcoming party, if they decided to roll into Poland.  It's that simple.

There is another logical reason for Russia to have declined to invade Poland.  Russia
was already in Afghanistan, as of Christmas season 1979.  It had enough on its plate.
In as much, there was no type of religious conversion going on with the Soviets in the
Year 1980.  Their consciences weren't being enlightened and their hearts weren't be-
ing moved.  They would have invaded Poland if they knew they could get away with
doing so.  Jimmy Carter made sure that they wouldn't risk invading Poland.  Thus, no
speech of John Paul had any effect on the Russians.

The Following is Standard History:

The Iran hostage crisis was in progress, and Russia was waiting to see if it would have
an excuse to roll into Iran.  If America rolled in, Russia would have followed.  So, do
not be deceived into thinking that the Russians would have cowered so close to their
own terrain.

For those not taught well in school, know this:  Russia's greatest quest was long since
understood by Western analysts to be the acquisition of a warm weather port.  Invad-
ing Iran would have given the Russians the opportunity to achieve that goal.  Invading
Poland wouldn't have given them any warm water port.  Therefore, the Russians elect-
ed to forgo Poland out of logistics ... not by moral conversion.  Oil-producing Iran was
more valuable than non-petroleum Poland.  After all, Russia still had a hold on White
Russia, aka Belarus.  Therefore, Poland was expendable.

The Way Jimmy Carter Really Was

The following anecdote about Carter came via the Pentagon:  Shortly before Jimmy
was to be sworn-in, he was being given a detailed tour of the Department of Defense.
There came the point when he was being told that a helicopter would always be on a
pad, ready to take him to command headquarters within 15 minutes, in the event of a
military emergency.  Jimmy asked, "Is this true?"  His tour guide: "Yes sir.  Within
15 minutes."  Jimmy then looked at his wrist watch and said, "Okay.  Go!"  "Sir?"
While looking at his wrist watch Jimmy once again said, "Go!"  He wanted to test the
procedure on the spot.  Such was former navy officer Jimmy Carter.